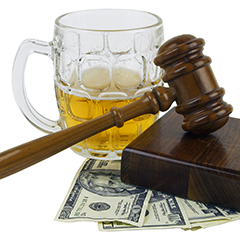 What is the best way to calculate the loss of well-known beer brands to a distributor whose franchise contract was lawfully terminated? This question, implicating Ohio’s Alcoholic Beverage Franchise Act, recently produced an important ruling on beer brand valuation.

‘Labattomy’: The supplier of Labatt and a host of other brands ended its franchise contracts with two distributors under Ohio’s “successor manufacturer” provision. The court found the terminations lawful and held a hearing to determine the “diminished value” of the business “that is directly related to the sale of the product or brand terminated or not renewed.” Under the statute, the value of such a business includes, but is not limited to, the “appraised market value of those assets … principally devoted to the sale of the terminated or nonrenewed product or brand and the goodwill associated with [it].”

Both sides presented opinions from experts with deep industry knowledge. The distributors’ expert performed a discounted cash flow (DCF) analysis that he applied to the businesses with the brands and without the brands. In addition, top executives of both distributors testified that they regularly negotiate brand values based on multiples of gross profits. Transactions might occur within a range of multiples of 1x and 6x gross profits, they suggested. For the subject brands, a multiple of 6x to 7x gross profits was appropriate given the volume and profitability of their sales.

The defendants’ expert argued there were not enough transactions with which to compare the subject brands. In general, he said, he considered using multiples to value brands a “short cut approach to calculating discounted cash flow.” He said that, although he intended to value the businesses in their entirety, the evidence failed to show that the termination had a noticeable effect on the distributors’ other assets. Therefore, he only conducted a DCF analysis for the value of the lost brands.

Hybrid approach: The court said it would use a “hybrid” approach to determine the diminished value in this case. This meant determining the fair market value of the franchise contracts using a DCF analysis and adding on any loss in the fair market value of other tangible or intangible components of the distributorships “directly resulting from loss of the Brands.”

The experts’ DCF models diverged on a few key components, such as the capital structure to use to calculate WACC and the cost savings input. The court said the valuation of the suppliers’ expert overall was more persuasive. Valuing the businesses in their entirety, as the distributors’ expert had done, “adds unnecessary complexity to what is a much more straightforward determination.”

Although the court rejected a comparable transactions approach, it paid some mind to the industry’s approach to beer brand valuation. It said it used the “collective testimony regarding gross multiples” as a check on the supplier expert’s DCF and concluded that the DCF-based results were “discordant” with market conditions. But, said the court, by adjusting the discount rate and cost savings inputs, the court was able to achieve a DCF-based outcome that was 3.25x gross profits for the first plaintiff and 3.47x gross profits for the second plaintiff. These figures fell within the industry average, the court noted.

Takeaway: This is a must-read case for valuators practicing in the alcoholic beverage industry. Only one other case with similar facts has dealt with the same Ohio statutory provision. There, the court was unable to make a definitive ruling on the proper methodology because one side’s valuation model was so defective as to compel the court to deem the opposing side’s approach the only rational one available in the case.

« IRS Reveals List of Top Tax Scams for 2016
Executive Compensation: What Are IRS Auditors Looking For? »