Executive Compensation: What Are IRS Auditors Looking For? 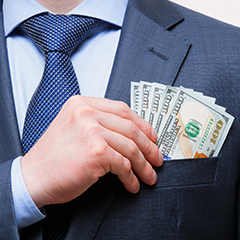 The IRS must learn in-house terminology being used by the business when they begin auditing or examining, as well as how the business maintains their records. In the case of executive compensation, the IRS is especially interested in arrangements in which the company deducts the high salary of one of its top executives using an exception under Internal Revenue Code Section 162(m).

Under this code section, which applies to publicly traded corporations, no deduction is generally allowed for annual compensation that exceeds $1 million for “covered employees.” However, there is an exception for “qualified performance-based” compensation, which must meet several requirements.

According to the IRS Audit Techniques Guide for examining agents, they must “first learn the identity of the individual(s) within the corporation who are most familiar with how the executive compensation records are maintained.” Then, the auditor is to have a general discussion with that person regarding executive compensation so that the IRS can narrow the focus of the documents it will formally request from the corporation.

Here is a non-comprehensive list of questions examples that IRS auditors are directed to ask taxpayers in an audit in regards to executive compensation arrangements under IRC Section 162(m):

If centralized files for each executive are maintained, what records should be in the file? For example, if an executive participates in different compensation arrangements, does the centralized file contain the written agreement and election forms with regard to the executive’s participation in each of the plans or programs?

Does the corporation have one or more qualified performance-based compensation plans that have been approved by its stockholders? If so, the IRS will want to determine whether those plans are in compliance with Section 162(m) in form and operation.

Has the corporation made modifications to performance goals or targets after the beginning of the period to which such goals or targets relate? Were amounts paid to covered employees whether or not the relevant goals and targets were attained?

What records are available to reflect stock-based compensation and how are they maintained? For example, if someone is granted stock options or restricted stock, are the grants evidenced by a Grant Agreement or Award Agreement? How does the corporation track exercises of stock options or the vesting of restricted stock grants? Is a centralized computerized data base used or does the corporation rely on paper documents?

At what level are grants of stock options and restricted stock made? For example, if an executive of a subsidiary is granted stock options, is the grant made at the parent level, or at the subsidiary level?

How are the compensation committee minutes documented? Do they include proposals, exhibits, attachments, resolutions, etc.?

Does the corporation provide phantom grants or awards, such as phantom stock or phantom equity? If so, how are they documented and tracked?

Does the corporation provide deferred compensation arrangements? If so, how are they documented? For example, are they via written agreements or election forms? How are deferred amounts tracked by the corporation and the executive (for example, by separate accounts, monthly statements, etc.)?

Does the corporation utilize the services of outside administrators, brokers, or consulting companies in the formation, administration and management of its various executive compensation plans or programs? If so, who are they and what plans or programs are they connected with?

How are stock options and restricted stock grants applied and how are applications made effective? For example, are stock options exercised directly with the corporation or through a broker or other third-party? And when an executive exercises stock options, does the executive receive the certificates evidencing the shares of stock upon exercise? Does he or she have to pay the exercise price for the options exercised or is there an option of a cashless exercise? Can the executive receive the difference between the exercise price and the fair market value of the stock in cash or other property?

Does the corporation have grant detail reports reflecting options granted, the grant number of the option, the dates of exercise of the options, and the fair market value of the stock as of the date of exercise? If so, how are these records maintained and are they available for individual executives?

Does the corporation provide split-dollar life insurance policies to any of its executives?

Does the corporation use acronyms, codes or other symbols to identify transactions, such as stock options that were granted as the result of a bonus plan? If so, what are they and what do they mean?

As you can see, going through an audit can be arduous process. It is in the best interest of businesses to document and maintain records, especially of its top executives.

« Key Ruling on Loss of Beer Franchise Contracts
Could Your Business Benefit from the Work Opportunity Tax Credit? »