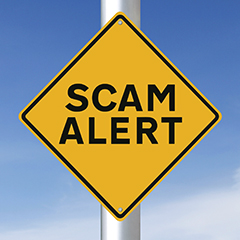 The IRS recently published a series of press releases to make tax payers aware of the “dirty dozen” tax scams for this year. The list is not entirely surprising, but it’s important to note that these scams have become increasingly technology-driven in recent years. Taxpayers can use this list to avoid becoming the victim or perpetrator of fraud.

Tax-related identity theft typically occurs when someone uses a stolen Social Security number to file a tax return and claim a fraudulent refund. Often, victims are unaware that their data has been stolen until they receive letters from the IRS stating that returns had already been filed using their Social Security numbers. The IRS cautions taxpayers to guard their personal information closely, in both paper and electronic formats.

The IRS has committed significant resources in recent years toward measures to detect and prevent tax-related identify theft scams. About 2,000 tax-related identity thieves have been convicted over the last three years. In 2015 alone, the IRS initiated 776 identity theft related investigations, which resulted in 774 convictions. The average jail time for these crimes was over three years for those sentenced in 2015.

The IRS also has partnered with the states and tax industry entities to create a more secure system for taxpayers. Participants in this “Security Summit” initiative share details of fraudulent schemes to increase protection. Many of the security measures are invisible to taxpayers, but you may, for example, notice additional login requirements when accessing personal information on IRS and state tax agency websites.

Phone scams rank second on the 2016 list because aggressive phone calls by criminals impersonating IRS agents remain a major threat to taxpayers. The agency has seen a surge of phone scams that threaten arrest, deportation, license revocation and other enforcement actions. The callers often demand personal information, such as Social Security numbers and account PINs, or immediate payments over the phone using credit, debit or prepaid cards.

“Taxpayers across the nation face a deluge of these aggressive phone scams. Don’t be fooled by callers pretending to be from the IRS in an attempt to steal your money,” said IRS Commissioner John Koskinen. “We continue to say if you are surprised to be hearing from us, then you’re not hearing from us.”

Phishing also remains at the top of the list. It occurs when criminals pose as someone from an organization you recognize and then send mass emails under your name. They may pretend to be employees of a bank, credit card company, tax software provider or government agency. Websites have even been created by criminals, and they appear legitimate but contain phony login pages. When you open a phishing email or click on a link it contains, your personal information may be compromised.

What are hackers gaining through phishing scams? The bogus emails and websites may infect your computer with malware without you even knowing it, and you may inadvertently forward the malware to people in your contacts list. The malware may give criminals access to sensitive files or allow them to track your keyboard strokes, exposing personal and log-in information.

“Choose your tax return preparer carefully because you entrust them with your private financial information that needs to be protected,” advises Commissioner Koskinen. “Most preparers provide high-quality service but we run across cases each year where unscrupulous preparers steal from their clients and misfile their taxes.”

If the tax preparer makes a promise that seems too good to be true, then beware, especially if it includes exceptionally low fees or amazing tax refunds. Choose a licensed professional with years of experience and an established reputation in your business community.

Individuals may evade U.S. taxes by hiding income in offshore banks, brokerage accounts or nominee entities and then using debit cards, credit cards or wire transfers to access the funds. Others have employed foreign trusts, employee-leasing schemes, private annuities or insurance plans for the same purpose.

When there are legitimate reasons for having financial accounts abroad, then there are reporting requirements that need to be met, and there are penalties and fines for those who don’t comply, possibly even criminal prosecution.

Important note. For tax years beginning after December 31, 2015, the due date for the Report of Foreign Bank and Financial Accounts (FBAR) will be April 15 under legislation extending the Highway Trust Fund. (Previously, the deadline was June 30.) The modified deadline coincides with the tax filing deadline for individuals.

During tax-filing season, it is common for scam artists to pose as tax preparers. In order to lure in victims, they might promise large tax refunds, post flyers, ads, and phony storefronts. They may even try to use areas of high trust to spread the word, such as churches and community groups.

These scammers frequently prey on low-income or elderly individuals who don’t have to file returns. They also target people who don’t speak English. They may promise fictitious rebates, benefits or tax credits, or they may file a false return in a person’s name and that person never knows that a refund was paid. As a result of these scams, a victim may subsequently lose federal benefits, such as Social Security benefits, certain veteran’s benefits or low-income housing benefits. These losses typically occur after a false claim, with bogus income amounts, is filed with the IRS.

Look for the warning signs. One sign that you may be a victim of this type of scam is when the preparer doesn’t give you a copy of your tax return after it’s been filed. Always review your tax return and ask questions if things don’t add up. You’re legally responsible for what’s on your return, even if it was prepared by someone else. Taxpayers who buy into such schemes may be penalized for filing false claims or receiving fraudulent refunds.

Commissioner Koskinen warns, “Fake charities set up by scam artists to steal your money or personal information are a recurring problem. Taxpayers should take the time to research organizations before giving their hard-earned money.”

If you would like to make a charitable donation, the IRS offers these basic tips to taxpayers:

The IRS warns taxpayers to think twice before overstating deductions. In addition to targeting claims for excessive charitable contribution deductions, the IRS is on the lookout for taxpayers who pad small business expenses or claim credits they’re not entitled to receive, such as the Earned Income tax credit or child tax credit.

The IRS increasingly relies on automated systems to generate most of its audits. It can normally audit returns filed within the last three years. However, additional years can be added if substantial errors are identified or fraud is suspected.

Along with disallowing inflated or bogus deductions, the IRS also may charge interest and penalties. Taxpayers who file incorrect tax returns may be charged 20% of the disallowed amount for filing an erroneous claim for a refund or credit. The agency may also assess another $5,000 penalty if a taxpayer has filed a “frivolous tax return.” A frivolous tax return is one that doesn’t include enough information to figure the correct tax or that contains information clearly showing that the tax reported is substantially incorrect.

A taxpayer could be assessed a penalty of 75% of the amount owed, on top of the full tax obligation, if the underpayment on the return resulted from tax fraud.

Dishonest taxpayers may try to inflate business tax credits or claim business credits that they’re not eligible to receive. For instance, the fuel credit is generally limited to off-highway business use or farming. But dishonest taxpayers may attempt to fraudulently claim the credit for personal use or falsify mileage records to claim it.

As with any other fraudulent tax return entry, overstated business credits may trigger a hefty IRS penalty.

This scam involves inflating or including income on a tax return that was never earned, either as wages or as self-employment income. The ultimate goal with these scams is usually to maximize refundable credits, such as the Earned Income tax credit (a particular IRS hot button). Taxpayers who attempt to falsify income may be charged significant penalties and interest, and doing so often leads to criminal prosecution by the Department of Justice.

The abusive tax shelter scam seems to make its way on the list every year. In the past, these ploys involved simple structuring of abusive domestic and foreign trusts. But they’ve become much more sophisticated, exploiting the financial secrecy laws of some foreign jurisdictions and the availability of credit and debit cards issued from offshore financial institutions. Perpetrators often use multiple pass-through entities, which they design to conceal the true nature and ownership of the taxable income and assets.

“The IRS and the courts hear many outlandish arguments from people trying to avoid their legal filing and tax obligations,” warns Commissioner Koskinen. “Taxpayers should avoid unscrupulous promoters of false tax-avoidance arguments because taxpayers end up paying what they owe plus potential penalties and interest mandated by law.”

The IRS describes common arguments made by those who advocate noncompliance with the federal tax law in “The Truth about Frivolous Tax Arguments.” Common frivolous arguments that the IRS hears from taxpayers who don’t pay their fair share of taxes include:

The 2016 version of this document includes recent cases that show the courts continue to regard such arguments as illegitimate.

The main messages from this year’s dirty dozen tax scams are clear: Taxpayers need to watch out for potential scams and adhere to the letter of the law. It’s illegal to evade taxes or scam unwary taxpayers. The IRS continues to use its resources to catch and prosecute dishonest individuals.