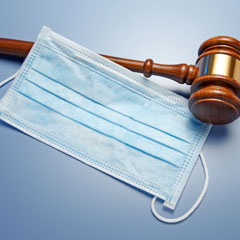 State and federal courts have started to rule on breach of contract claims from plaintiffs whose businesses suffered economic losses triggered by the COVID-19 crisis. Thus far, the court decisions have not been favorable to the plaintiffs. In the instant case, a number of restaurants in the District of Columbia that had to suspend operations after the mayor mandated COVID-19-related closures sued the same insurer after it denied coverage for business interruption losses. In a motion for summary judgment, the plaintiffs argued the language of the policy contemplated coverage for the closures the mayor’s orders necessitated. The court disagreed with the plaintiffs and denied their motion.

The plaintiffs owned a number of prominent restaurants in the District of Columbia (D.C.) The owners all had insurance with the same defendant, Erie Insurance Exchange, and their policies were pretty much identical in terms of the relevant language.

In essence, each policy provided coverage for “loss of income and/or rental income” caused by “partial or total interruption of business resulting directly from loss or damage to the property insured.” The relevant document also stated that “the policy insured against direct physical loss,” barring certain exclusions not relevant to the case.

When the severity of the COVID-19 pandemic became apparent, in March 2020, the D.C. mayor, Muriel Bowser, declared a state of emergency and issued a number of orders that first curtailed the operation of restaurants and bars and, finally (on March 24, 2020), closed down all nonessential businesses. Also, on March 30, the mayor ordered D.C. residents to stay at home whenever possible.

Following the mayor’s orders, the plaintiffs were forced to close their restaurants and, as a result of the closures, suffered loss of income. They filed business interruption claims with the defendant, which were denied. Subsequently, the plaintiffs filed suit, seeking a declaration from the court that, under the express language of the insurance contracts, the claims were covered. The plaintiffs and the defendant insurer then both filed motions for summary judgment.

This case is a contract case and requires the court to interpret the applicable insurance policy.

Whether an insurance contract is ambiguous is a legal question. Under the rules of interpretation, a court must give words in the contract their common, ordinary, and popular meaning. If provisions in a contract are ambiguous, the interpretation becomes a question for the fact-finder. If there is no ambiguity, summary judgment is appropriate. The written, signed contract speaks for itself and binds the parties without extrinsic evidence. A court should not seek ambiguity where none exists.

Was there ‘direct physical loss’?

The court said the crux of the dispute was whether closure of the restaurants due to the mayor’s orders constituted a “direct physical loss” under the insurance policy.

The plaintiffs made various arguments to meet the “direct physical loss” requirement. For example, they argued that loss of use of the restaurants’ properties was “direct” as the closures were the direct result of the mayor’s orders. There was no intervening action.

The court rejected this proposition, noting that “[s]tanding alone and absent intervening actions by individuals and businesses, the orders did not effect any direct changes to the properties.”

The plaintiffs argued the loss was “physical” because the virus causing COVID-19 was “material” and “tangible”; also, the harm to the business was caused by the mayor’s orders not “some abstract mental phenomenon such as irrational fear causing diners to refrain from eating out.”

The court noted the plaintiffs failed to show that the virus was actually present on the restaurant premises when they were forced to close. The mayor’s orders did not have any effect on the material, tangible structure of the properties, the court noted.

The plaintiffs argued the term “loss” in the policy was different from “damage.” “Loss” included the loss of use, and this only required the plaintiffs to be deprived of the use of their properties; the properties did not have to suffer physical damage, the plaintiffs maintained.

The court concluded the plaintiffs could not show direct physical loss to the business resulting from the COVID-19-related orders. Accordingly, it granted the defendant’s motion for summary judgment and closed the case.