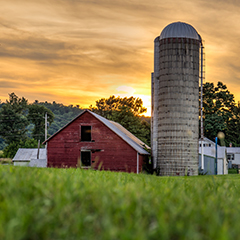 In a family dispute featuring a farm business that owned real estate, the parties’ experts disagreed on an issue that was pivotal to how they would value the sellers’ distributional interest. The trial court resolved the valuation dispute by adopting one expert’s proposed methodology while making significant adjustments to that expert’s weighting of the various results. Both parties appealed the findings.

The flash point was a farm the parents had organized in 1999 as a limited liability company. At the time of the dispute, the company owned 1,200 acres of farmland. An operating agreement stated its purpose was “[t]o purchase, own, manage, lease and otherwise deal with real estate in the conduct of farming and other agricultural businesses and activities related hereto.” Per this agreement, the company would terminate in November 2029. After the father died, his interest was passed down to the five children. Eventually an irresolvable dispute among the siblings developed, leading one group of children, which held a 27.5% interest in the company, to present a notice of dissociation. Negotiations between the dissociating members and the remaining members went nowhere, and the case proceeded to trial for a determination of the fair value of the dissociating members’ distributional interest in the company. A real estate appraisal found the farmland assets were worth $9.7 million on the valuation date.

Both sides retained valuation experts who took opposing views of what the company was. The dissociating members’ (sellers’) expert contended it was a holding company rather than an operating company. The net asset value method was the most appropriate method to value the company, he said, citing Revenue Ruling 59-60, which provides that the value of stock in holding companies was closely related to the value of their underlying assets. After valuing the entire company, the sellers’ expert determined the dissociating members’ interest on a prorate basis and arrived at a fair value of about $3.1 million. His valuation relied on company balance sheets, and he did not speak with members of the company.

The remaining members’ (buyers’) expert noted the company’s operating agreement did not state that its purpose was to buy and sell real estate for profit. He said it was important to consider intent in determining a business’s value. Here, communication with members of the company indicated there was no intent to liquidate property in the near future. Strictly speaking, he said, the business was a “company that holds farmland.” It was not a holding company. The buyers’ expert decided to use the net asset value approach as one of four methods to value the company and assign varying weight to the results the four analyses generated. The three other methods were the “historical dividend stream” method, the “historical capitalization of earnings” method, as well as a “2029 dissolution value” analysis that pivoted around the November 2029 termination date in the operating agreement. When added up, the four weighted values yielded a total net value for the company of $861,600. The fair value of the dissociating members’ interest was about $237,100, the buyers’ expert concluded.

The trial court rejected the idea that the company was a holding company. It found the net value of the assets was only one of several relevant factors to be considered in the fair value determination. The court generally agreed with the approach the buyers’ expert proposed but found he placed too much weight on the company’s dividend- or income-generating potential; on the other hand, he did not give due consideration to the substantial value of the company’s real estate asset. By adjusting the weighting, the trial court arrived at a total fair value of $4.2 million, which translated into a $1.2 million value for the distributional interest.

In appealing the valuation findings, the dissociating members/sellers claimed the evidence allowed for only one conclusion: that the company was a holding company. As such, it had to be valued under the net asset value method. The remaining members/buyers argued the trial court correctly adopted their expert’s “four-pronged weighted valuation method” but erred when it adjusted the weighting.

The appellate court rejected both arguments. The trial court properly determined that the buyers’ expert presented a “useful” framework for determining the fair value of a going concern. In modifying that methodology, the trial court “correctly” balanced consideration of the company’s income potential with other considerations, including the net asset value and other factors related to the history and circumstances of the company, the appellate court said. Accordingly, it upheld the lower court’s fair value calculation.