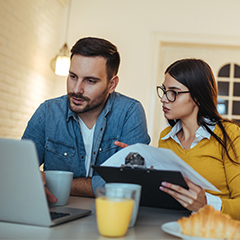 Are your employees having enough money withheld from their regular paychecks? The Tax Cuts and Jobs Act (TCJA) has made a number of significant changes to the tax rules for individuals for 2018 through 2025. Consequently, many taxpayers, in Maine and elsewhere, who previously itemized their deductions are likely to claim the standard deduction starting in 2018.

How is withholding affected by the TCJA? The amount employees elected to have withheld on their Form W-4 was based on the previous tax law and may need to be revised under the new law. If too much is withheld, the taxpayer is essentially giving the IRS an interest-free loan of their money until they receive their 2018 refund sometime in 2019. If not enough is withheld, that 2018 return could involve a large payment.

Unfortunately, figuring out the right withholding amount under the TCJA isn’t easy. Suggest a “paycheck checkup” to your employees so they can make these decisions themselves.

2018 tax returns aren’t due until next April. And generally, you can’t wait until you file to pay all the taxes you owe. Instead, employers are required to withhold taxes from your employees’ paychecks. Those without an employer doing the withholding—the self-employed, retirees, others with investment income—must make quarterly estimated payments.

An employee might need to have tax withheld and pay quarterly installments if they earn substantial income beyond their salary. Failure to comply with the requirements can results in an estimated tax underpayment penalty in addition to the tax liability itself.

Taxpayers can avoid an estimated tax underpayment penalty using any one of these three safe harbor rules:

Despite these safe harbor rules, the IRS encourages taxpayers to use withholding whenever possible to navigate their way around potential penalties.

If employees have been having “just the right amount” withheld for their circumstances in the past, the TCJA has altered the landscape. Examples of major changes that will affect individual taxpayers for 2018 through 2025 include the following:

In light of these changes, many taxpayers who have itemized in the past may instead opt for the standard deduction starting in 2018. This could have a major impact on their withholding obligations.

To adjust their withholding, employees can request a new W-4 form from you, fill it out and then submit it. Any withholding change should be reflected in the next payroll calculation.

Computing the right amount to withhold can be difficult, and knowing which types of situations would require a change tricky. There are numerous facts that can affect this decision. For example, here are several scenarios that might lead to a withholding change—do any of them remind you of your employees?

Under the Tax Cuts and Jobs Act (TCJA), the Millers’ 2018 itemized deduction for state and local taxes will be limited to only $10,000. Depending on their other deductions, claiming the standard deduction of $24,000 may be a better decision. Terry should definitely re-evaluate their withholding for 2018.

Sam Patel recently got married and purchased a new home in an expensive neighborhood in March. With the new acquisition debt of $1 million, the couple’s mortgage interest payments are expected to be around $7,000 a month, or $70,000 for 2018.

The Patels expect to itemize deductions, but interest on only $750,000 of acquisition debt will be deductible under the TCJA. These new homeowners should assess their withholding to determine whether they need to set aside more or less in 2018 to cover their estimated tax obligation.

Jordan Smith is half of a married couple which files jointly. They have four dependent children, the two eldest twins turning 17 this year. Previously, the Smiths itemized deductions. But, under the TCJA, their expected itemized deductions will total only $20,000. So, they expect to take the $24,000 standard deduction.

In addition, the Smiths will lose out on the tax benefit of six personal exemptions — but two of their children will qualify for a $2,000 child tax credit. Their twins will each qualify for a $500 tax credit, but they will not qualify for higher education tax credits until they go to college in 2019. The Smiths may need to revise their withholding in 2018 and then again when the twins go off to college.

The IRS offers worksheets for estimating the “right” amount of withholding, as well as a new online withholding calculator to help taxpayers crunch the numbers. Providing information on this and recommending employees speak with their tax advisors will help them sort through the changes coming out of the TCJA.