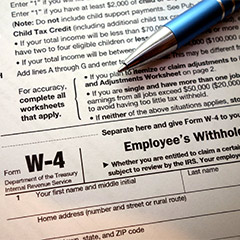 The deadline to begin using the 2018 federal income tax withholding tables, which reflect changes made by the Tax Cuts and Jobs Act (TCJA) was February 15, 2018. Although most Maine employers had no problems meeting the deadline, many employees question how the TCJA will affect them.

Those are findings of a recent American Payroll Association survey of 1,000 payroll and finance professionals. The Tax Reform Membership Survey found that about 97% of respondents said they began using the tables by the February 15 deadline. Nearly 84% of participants said that the tax law didn’t place any additional burden on year-end processing. Almost 63% noted that they process payrolls in-house.

Typically, the annual withholding tables come out in December, but were delayed until January 11 due to the enactment of the TCJA. Employers only had until February 15 to begin using the tables. Of the survey respondents, about 17% said they started using the tables between January 15-19, 27% started the week of January 22, and about 32% began the week of January 29.

Changes in the Law

Effective Jan. 1, 2018, the TCJA brings many modifications, including:

Many employees, on the other hand, have expressed concerns about the long-term impact the law will have on their finances. Fourteen percent of employers said they received a large number of employee questions, but the majority, 61% say they received only a few inquiries. Among the most common questions were:

“Input from our survey made it clear employees are worried they’ll be negatively affected by the new law once tax time 2019 rolls around,” said Michael O’Toole, Esq., Senior Director of Publications, Education, and Government Relations for the APA. “It will be important for employees to quickly review their withholdings once the new Form W-4 is available to make sure they are not under withholding on their federal taxes.”

Reaching Out to Employees

When asked if they had been proactively communicating with employees to let them know how the TCJA could affect their paychecks, about 57% said yes, 10% said they plan to do so; 30% said no.

« How Escheat Laws Might Affect Your Business
What if a Customer Doesn’t Pick Up Property? »