Questioning the Expertise of a Witness 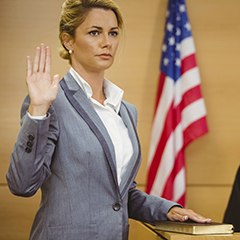 The 1993 Daubert case says that an attorney is permitted to challenge an expert witness’s credentials, and if successful, the expert will not be allowed to testify. One case before the U.S. Court of Federal Claims shows how an expert can successfully defend their qualifications and methodologies when they’re subjected to a Daubert challenge.

This important case involved a dispute over gift and income tax refunds filed by stockholders in Schwan’s Sale Enterprises, Inc.(SSE) a company that produced food products. The IRS disallowed the valuation of stock gifts made by SSE and assessed tax deficiencies against each of the owner’s children.

The plaintiffs made a Daubert challenge at trial against an IRS expert, Dr. Herbert Spiro. Dr. Spiro was called to offer a valuation of non-voting SSE shares. (Okerlund v. United States, US Ct. of Fed. Claims, 99-133T &99-134T )

In their Daubert challenge, the plaintiffs argued that the expert’s had insufficient qualifications, didn’t spend much time working on the valuation, and delegated most of the work to his assistants, and therefore should not be allowed to testify. The court found these arguments unconvincing for several reasons:

This case provides useful guidance for firms preparing for trial. Experienced financial experts with the requisite professional credentials and education are well suited to defend against Daubert challenges. For more information about valuations and financial experts, make an appointment with Filler & Associates.