Help from the IRS for Hurricane Irma Victims 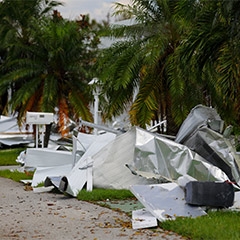 In response to Hurricane Irma victims in parts of Florida, U.S. Virgin Islands, and other areas, the IRS is offering extra time to complete tax-related responsibilities. Affected individuals now have until January 31, 2018, to file certain individual and business tax returns and make certain tax payments.

“This has been a devastating storm for the Southeastern part of the country, and the IRS will move quickly to provide tax relief for victims, just as we did following Hurricane Harvey,” said IRS Commissioner John Koskinen.

“The IRS will continue to closely monitor the storm’s aftermath, and we anticipate providing additional relief for other affected areas in the near future,” he added.

The IRS is offering this relief to any area designated by the Federal Emergency Management Agency (FEMA), as qualifying for individual assistance. Currently, parts of Florida, Puerto Rico and the Virgin Islands are eligible, but taxpayers in localities added later to the disaster area, including those in other states, will automatically receive the same filing and payment relief. The current list of eligible localities is always available on the disaster relief page on IRS.gov.

A variety of business tax deadlines are also affected including the October 31 deadline for quarterly payroll and excise tax returns. Businesses with extensions have the additional time including, among others, calendar-year partnerships whose 2016 extensions run out on September 15, 2017 and calendar-year tax-exempt organizations whose 2016 extensions run out on November. 15, 2017. The Hurricane Irma disaster relief page has details on other returns, payments and tax-related actions qualifying for the additional time.

The IRS is also waiving late-deposit penalties for federal payroll and excise tax deposits normally due during the first 15 days of the disaster period. To check the time periods that apply to each jurisdiction, look on the disaster relief page.

Taxpayers need not contact the IRS to get this relief, as the IRS automatically provides filing and penalty relief to any taxpayer with an IRS address of record located in the disaster area. However, if an affected taxpayer receives a late filing or late payment penalty notice from the IRS that has an original or extended filing, payment or deposit due date falling within the postponement period, the taxpayer should call the number on the notice to have the penalty abated.

In addition, the IRS will work with any taxpayer who lives outside the disaster area but whose records necessary to meet a deadline occurring during the postponement period are located in the affected area. Taxpayers qualifying for relief who live outside the disaster area need to contact the IRS at 866-562-5227. This also includes workers assisting the relief activities who are affiliated with a recognized government or philanthropic organization.

The tax relief postpones various tax filing and payment deadlines that occurred starting on September 4, 2017 in Florida, and September 5, 2017 in Puerto Rico and the Virgin Islands. As a result, affected individuals and businesses will have until January 31, 2018, to file returns and pay any taxes that were originally due during this period.

This includes the September 15, 2017 and January 16, 2018 deadlines for making quarterly estimated tax payments. For individual tax filers, it also includes 2016 income tax returns that received a tax-filing extension until October 16, 2017. The IRS noted, however, that because tax payments related to these 2016 returns were originally due on April 18, 2017, those payments are not eligible for this relief.

A Choice of When to Claim

Businesses and individuals who suffered uninsured or disaster-related losses that are not covered by insurance can choose to claim them on either the return for the year the loss occurred (in this instance, the 2017 return normally filed next year), or the return for the prior year (2016).

The tax relief is part of a coordinated federal response to the damage caused by severe storms and flooding and is based on local damage assessments by FEMA. For information on disaster recovery, visit disasterassistance.gov.