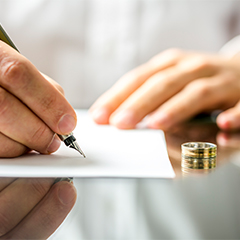 A complex New Jersey divorce litigation with multiple defendants and several family businesses illustrates the challenges appraisers and the trial court faced in determining the appreciated value of numerous separate premarital and gifted assets for equitable distribution purposes. The case highlights basic principles related to the status of an asset.

Before the marriage, the husband and his parents established four corporations involved in operating Princeton Airport in New Jersey. Initially, all three partners each held a one-third interest in the companies. Several years into the marriage, the husband’s parents executed an estate plan under which each parent gifted his and her one-third ownership interest in three of the companies to the husband, making him the sole owner of those corporations.

However, the parents maintained their combined two-thirds ownership in one company. In connection with the transfers, the parties also executed a new shareholder agreement that required shares in the parent-controlled company to be sold back for “book value” in the event of the death, divorce, disability, or bankruptcy of a shareholder.

The husband and wife married in 1992 and separated in summer 2003. The wife filed for divorce in early 2005. In 2007, the parents invoked the “divorce provision” requiring the husband to sell his shares back to the parent-controlled company for book value.

One of the contested companies had engaged in a “like-kind” exchange under Section 1031 of the Internal Revenue Code. To enable the transaction, the husband and his parents had used some personal funds. Besides the funding, the husband apparently had no meaningful role in managing and arranging for the sale of the exchanged property.

The divorce trial took place in 2012 and 2013. The wife subsequently challenged most of the trial court’s rulings with the New Jersey Superior Court, Appellate Division.

Among other things, the wife contended the estate plan, especially the new shareholder agreement and its buyback provision, was an attempt to defraud her of her equitable distribution.

The trial court found, and the appellate division affirmed, the wife had failed to show the parents knew of any marital difficulties when they made the plan. The applicable statute allowed for “reasonable restrictions on the transfer of shares.”

The wife also claimed that a loan to the husband to buy his interest in one of the corporations had become commingled with marital funds, which exposed the asset to equitable distribution.

The trial court disagreed, noting the loan was a premarital event, and the husband’s interest in the company remained his separate property. Moreover, the asset was passive—“any value fluctuations were based exclusively on market conditions.” The court noted the husband’s role in the Section 1031 exchange related to this asset and the exchanged property was “minimal and passive.”

However, because the husband used marital funds to affect the Section 1031 exchange, the wife was entitled to half of that amount. The court’s appellate division upheld all of these findings.

The trial court decided that a second company was an active asset for equitable distribution purposes. The wife, it said, was entitled to the company’s appreciation in value from 1992, when the parties were married, to 2000, when the company was gifted to the husband by his parents, then to 2005, when the wife filed for divorce.

Under the applicable case law, an “active immune asset involves contributions and efforts by one or both spouses toward the asset’s growth and development which directly increase its value.” If the increase is the result of the owner spouse alone, it is not subject to distribution. But, “to the extent that it may be attributable to the expenditures or the efforts of the non-owner spouse … a determination must be made regarding the extent the original investment has been enhanced by contributions of either spouse.”

The appellate division concluded the valuation methodology the trial court used was within its discretion.

In terms of a third asset, the trial court found the wife had a right to one-sixth of the appreciation during the marriage. The percentage reflected one-half of the husband’s one-third premarital interest.

The appellate panel agreed and found the trial court had carefully evaluated the valuation evidence to arrive at a fair value for its appreciation.

One major unresolved issue in the appeal was the status of an investment account. The trial court found the husband’s father was the sole owner. Therefore, the asset was exempt from equitable distribution.

The appellate panel disagreed, noting the account held funds from various parties. The account was not gifted as part of the estate plan, and it did not appear to be funded solely by corporate monies. Therefore, the appellate division remanded for a determination of the ownership of the account and a review of the effects on the valuations and equitable distribution findings.