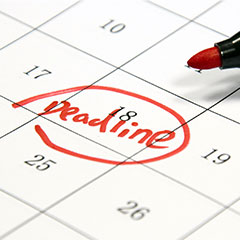 If you have an authority over or interest in a foreign financial account, then the IRS wants you to provide information about the account by filing a form called the “Report of Foreign Bank and Financial Accounts” (FBAR).

The annual deadline for filing FBARs has been changed and now coincides with the tax filing deadlines for individuals, under the Surface Transportation and Veterans Health Care Choice Improvement Act of 2015. You must generally file FBARs by April 18, 2017 for accounts held in 2016. The previous deadline was June 30, excluding weekends and holidays.

Important note: The Financial Crimes Enforcement Network (FinCEN) will grant an automatic extension to October 15 if you fail to meet the annual FBAR due date. Accordingly, specific requests for this extension aren’t required.

FBARs are not filed with federal tax returns. Each year, citizens and resident aliens of the United States, as well as domestic partnerships, corporations, estates and trusts, must generally file an FBAR form electronically with the FinCEN if:

1. They have a direct or indirect financial interest in — or signature authority over — one or more accounts in a foreign country. This includes bank accounts, brokerage accounts, mutual funds, trusts or other types of foreign financial accounts, and

2. The total value of the foreign accounts exceeds $10,000 at any time during the calendar year.

FBARs may be required even if the foreign account doesn’t produce any taxable income. And an individual who jointly owns an account with a spouse may file a single FBAR report as an individual.

Taxpayers also may be subject to FBAR compliance if they file an information return related to certain foreign corporations, foreign partnerships, foreign disregarded entities, or transactions with foreign trusts and receipt of certain foreign gifts. Some individuals are exempt, however.

Exceptions to the Rules

It is important to take the FBAR requirement seriously. Failing to file an FBAR can result in the following penalties if assessed after August 1, 2016, and associated violations occurred after November 2, 2015:

The IRS states that the FBAR “is a tool to help the U.S. government identify persons who may be using foreign financial accounts to circumvent U.S. law. Investigators use FBARs to help identify or trace funds used for illicit purposes or to identify unreported income maintained or generated abroad.”

The Foreign Account Tax Compliance Act (FATCA) is another initiative to combat tax fraud using offshore accounts. It led to the creation of Form 8938, “Statement of Specified Foreign Financial Assets.” This form must be attached to your federal income tax return each year if your specified foreign financial assets exceed these reporting thresholds:

For taxpayers living abroad, different reporting rules and limits apply. Form 8938 covers an expanded list of foreign assets not covered by FBAR. And filing Form 8938 does not exempt you from having to file an FBAR.

The penalty for failing to file Form 8938 is $10,000, with an additional penalty up to $50,000 for continued failure to file after IRS notification. A 40% penalty on any understatement of tax attributable to a transaction related to the nondisclosed assets can also be imposed.

If you have an interest in, or authority over, a foreign account, it’s wise to consult with a tax professional. Your tax advisor can ensure you meet the requirements for reporting foreign accounts and help avoid penalties for noncompliance.