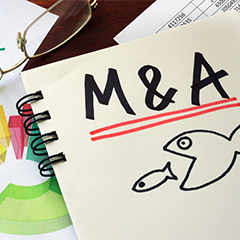 Don’t second-guess the result of a robust, arm’s-length sales process! That’s the view the Delaware Court of Chancery has been taking lately in statutory appraisal actions—and it recently did so again.

The suit involved the sale of one of the largest software companies in the world to a group of private equity firms for $46.25 per share. Following the M&A playbook, arbitrageurs petitioned the Delaware Court of Chancery for a statutory appraisal of their shares. They alleged an activist investor had forced the company to sell itself below its value.

At trial, both sides’ experts agreed that a discounted cash flow (DCF) analysis was the way to determine the stock’s fair value at the time of the merger, but they reached very different results. The petitioners’ expert arrived at $67.08 per share, i.e., 145% of the merger price. The company’s expert calculated a $37.88-per-share price—just over half of the value the opposing expert proposed. The court noted the “wildly divergent” outcomes stemmed from differences over key inputs. It decided to perform its own DCF calculation.

For example, both experts relied on the same management projections, but the company’s expert reduced the projected revenue by 5% because in the past the company repeatedly had missed its revenue goals. The court agreed that the projections revealed “a bias toward optimism” but for purposes of its DCF found them to be reliable. It called the downward adjustment “too speculative to accurately account for that bias.” There was a marked difference in the experts’ discount rate that had to do with the equity risk premium (ERP). The petitioners’ expert used a supply-side ERP, reasoning that valuation calculations were forward-looking. The company’s expert used a historical ERP, calling it “the most generally accepted ERP” and saying “any model that attempts to estimate future ERP is subject to intolerable estimation errors.” The court noted that recent decisions from the Chancery favored a supply-side ERP. But it also said that which ERP to use was “a vigorously debated topic, not just between these two experts, but in the financial community at large.” The court added “scholarship may dictate other approaches in the future.” For its DCF, the court used a supply-side ERP to arrive at a discount rate of 10.5%. The court’s DCF analysis yielded a $48.00-per-share price.

But ultimately the Chancery opted to use the merger price as the indicator of value, expressing concern over irreducible uncertainty surrounding the key DCF inputs. It pointed to the company’s history of “problematic” projections, such that the figures “could distort value,” and it said the record did not point to a reliable method to adjust the projections. Also, the continuing debate over the ERP created still more uncertainty that compromised the DCF analysis.

In contrast, there was integrity in the sales process. The company staged two auctions over a period of several months to test the market and evaluated numerous bids before settling on the final price, $46.25. There was no evidence that pressure from the activist investors led to a rushed, ineffective sale, the court determined.

Another loss for merger arbitrageurs. Lacking “complete confidence” in critical aspects of the DCF analysis, the Chancery once again stuck to the merger price as the indicator of fair value.

« What Is the Correct Standard of Value in Divorce?
Spotlight On Business Tax Trends »