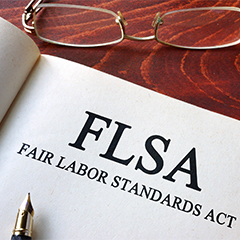 A bill that would delay the start of new federal overtime pay rules from December 1, 2016 to June 1, 2017 was passed and sent by the U.S. House of Representatives to the Senate. However, President Obama has indicated he will veto the bill if it hits his desk. The House bill was introduced shortly after officials from 21 states filed suit in federal district court to block the changes.

The final overtime rules make significant changes to the Fair Labor Standards Act (FLSA). They increase from $455 a week to $913 a week, the standard salary level used to determine whether executive, administrative, and professional (EAP) employees are eligible to receive overtime. They also include a mechanism to automatically update the standard salary level requirement every three years, beginning on January 1, 2020. However, the rules don’t change any of the existing job duty requirements to qualify for exemption from overtime.

The bill was introduced by Rep. Tim Walberg (R-MI). In a statement, he claimed that the Department of Labor (DOL) is “forcing those who have to deal with the real-world consequences to make significant changes before an arbitrary December deadline.”

The White House issued a news release stating that “While this bill seeks to delay implementation, the real goal is clear — delay and then deny overtime pay to workers.”

The lawsuit by the 21 states alleges that the DOL revisions will be costly to employers and that the department should have looked at the duties test to determine whether changes are needed to the type of work that should be eligible for overtime. Additionally, the suit says that automatically adjusting the salary level every three years without Congressional review disregards current economic conditions and violates federal law.

A similar complaint was filed by the Chamber of Commerce, which states that the new salary level is so high that it “is no longer a plausible proxy for the categories exempted by Congress,” and, that as a result, the exemption will effectively be lost for entire categories of EAP employees.

The National Federation of Independent Businesses (NFIB) also added opposition to the overtime rule. The group filed a petition also requesting an extension of the compliance deadline to June 1, 2017. Its petition states that large corporations with legal, financial, and personnel resources are more likely to comply with the December deadline than small businesses that lack “specialized compliance personnel and sophisticated timekeeping and payroll systems.”

Taking Time From Other Business Matters

The NFIB says the only solution for its members is for an owner or manager to spend a substantial amount of time to comprehend and implement the final rule, which takes away from the time that they spend on other business matters.

The President of the NFIB, Juanita Duggan, says that “many thousands of small business owners will find themselves suddenly out of compliance and in jeopardy of fines and litigation” if the effective date of the final rule is not extended.

Businesses Need to Be Prepared

The start date for the new rule is still currently scheduled for December 1, despite all of the opposition.  To help ensure your business is ready to comply with the deadline, consult with your financial and payroll advisors.

« Did You Miss the 60-Day Deadline for Your IRA Rollover?
Tax Court Explains Valuation Method Behind Solvency Ruling »