Compare and Contrast the Republican and Democratic Tax Platforms 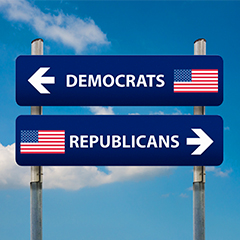 Now that both major political party conventions are finally behind us, it’s time to focus on the upcoming national election. Among their many differences, the Republicans and Democrats have widely divergent tax platforms. It’s good to know what tax positions the two parties and their presidential candidates have staked out even though platforms are always relatively nonspecific and not necessarily synced with what the presidential candidates have in mind. Here’s a quick summary.

Adopted on July 25, the 2016 Democratic national platform includes generalized goals that you might expect from the Democrats, such as supporting small businesses by providing tax relief and simplifying the tax code, and closing tax loopholes that benefit wealthy individuals.

Creating a surtax on multimillionaires and restoring fair taxation on multimillion-dollar estates to ensure that wealthy individuals pay their fair share of federal taxes,

As of now, Democratic presidential nominee Hillary Clinton has provided more specific details on her tax proposals than her opponent. Some of these ideas elaborate on (or contrast with) her party’s platform.

Businesses. Clinton would like to impose new restrictions and tax increases on U.S. companies with foreign operations. Her plans also include a risk fee on large banks and financial institutions, as well as curbing tax subsidies for oil and gas companies.

She’d also offer a 15% tax credit for employers that share profits with workers and a $1,500 tax credit to businesses for each new apprentice that they hire and train.

Individuals. Higher income tax rates for wealthy individuals would be included in Clinton’s plans. She advocates a 4% fair-share surcharge on individuals who earn more than $5 million per year. And she’d ask the wealthiest to contribute more to Social Security. In addition, she proposes limiting certain itemized deductions for high-income individuals and disallowing IRA contributions for individuals who have large IRA balances.

Capital gains. Clinton proposes a graduated tax rate regime where the capital gains tax rate decreases from 39.6% to 20% over a six-year period. (The 3.8% net investment income tax would still apply, however.) The idea is to encourage long-term investing. Assets held for more than one year but not more than two years would be impacted the most: Tax rates on gains from those assets would nearly double.

Healthcare. Clinton proposes a 20% credit to help taxpayers offset caregiving costs for elderly family members (up to a maximum credit of $1,200).

In addition to liberalizing the existing premium tax credit to make healthcare coverage more affordable, she’d establish a tax credit of up to $5,000 per family for buying health coverage on ACA exchanges.

The 2016 Republican national platform was adopted on July 18. In general, the Republicans want to promote economic growth and eliminate unspecified special-interest loopholes, while being mindful of the tax burdens that are imposed on the elderly and families with children.

Here’s what’s been discussed on his website or on the campaign trail to date.

Businesses. Trump proposes cutting the corporate tax rate to 15% (from the current 35%). His proposed 15% tax rate would also apply to business income from sole proprietorships and business income passed through to individuals from S corporations, limited liability companies and partnerships.

He’d impose a cap on business interest deductions. Trump would eliminate the tax deferral on overseas profits and allow a one-time 10% rate for repatriation of corporate cash that’s held overseas.

The current tax treatment of carried interest for speculative partnerships that don’t grow businesses or create jobs and are not risking their own capital would also be ended by his plan.

Capital gains. His proposed tax rates on long-term capital gains and dividends would be 0%, 15% and 20%.

Estate tax. Trump would like to eliminate the federal estate tax.

Healthcare. Trump would like to repeal the ACA and any ACA-related tax increases, including the 3.8% net investment income tax on wealthy individuals. But he would let individuals fully deduct health insurance premium payments.