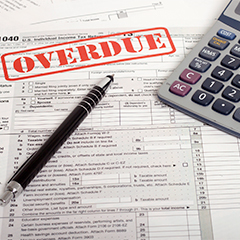 The time for filing last year’s individual federal income tax return passed you by in April, unless you’ve extended the due date to October 17. What if you didn’t extend and you haven’t yet filed your Form 1040? And what if you can’t pay your tax bill? Here’s an explanation on how to handle these situations.

Maybe you had negative taxable income or paid your fair share via withholding or estimated tax payments, and you’re certain you don’t owe any federal tax for last year. But you didn’t file or extend the deadline because you were missing some records, were too busy, or had some other convincing reason (to you) for not meeting the deadline.

No problem, since you don’t owe — right? Wrong.

While it’s true there won’t be IRS interest or penalties (these are based on your unpaid liability, which you don’t have), blowing off filing is still a bad idea. For example:

There are other more esoteric reasons that apply to taxpayers in specific situations. However, the bottom line is, you should file a 2015 return, even though you’ve missed the deadline and believe you don’t owe.

“I Owe but Don’t Have the Dough”

In this situation, there’s no excuse for not filing your 2015 return, especially if you obtained a filing extension to October 17.

If you did extend, filing your return by October 17 will avoid the 5%-per-month “failure-to-file” penalty. The only cost for failing to pay what you owe is an interest charge. The current rate is a relatively reasonable 0.83% per month, which amounts to a 10% annual rate. This rate can change quarterly, and you’ll continue to incur it until you pay up. If you still can’t pay when you file by the extended October 17 due date, relax. You can arrange for an installment arrangement (see below).

If you didn’t extend, you’ll continue to incur the 5%-per-month failure-to-file penalty until it cuts off:

While the penalty can’t be assessed for more than five months, it can amount to up to 25% of your unpaid tax bill (5 times 5% per month equals 25%). So you can still save some money by filing your 2015 return as soon as possible to cut off the 5%-per-month penalty. Then you’ll continue to be charged only the IRS interest rate — currently 0.83% per month — until you pay.

The IRS will collect the resulting penalty and interest if you still don’t file your 2015 return. You’ll be charged the failure-to-file penalty until it hits 25% of what you owe. For example, if your unpaid balance is $10,000, you’ll rack up monthly failure-to-file penalties of $500 until you max out at $2,500. After that, you’ll be charged interest until you settle your account (at the current monthly rate of 0.83%).

Save Money with an Installment Agreement

By now you understand why filing your 2015 return is crucial even if you don’t have the money to pay what you owe. But you may ask: When do I have to come up with the balance due? The answer: As soon as possible, if you want to halt the IRS interest charge. If you can borrow at a reasonable rate, you may want to do so and pay off the government, hopefully at the same time you file your return or even sooner if possible.

As an alternative, you can usually request permission from the IRS to pay off your bill in installments. This is done by filing a form with your 2015 return, and on the form you suggest your own terms. For example, if you owe $5,000, you might offer to pay $250 on the first of each month. You’re supposed to get an answer to your installment payment application within 31 days of filing the form, but it sometimes takes a bit longer. Upon approval, you’ll be charged a $120 setup fee or $52 if you agree to automatic withdrawals from your bank account.

As long as you have an unpaid balance, you’ll be charged interest (currently at 0.583% a month, which equates to a 7% annual rate), but this may be much lower than you could arrange with a commercial lender. Other details:

Finally, if you can pay what you owe within 120 days, you can arrange for an agreement with the IRS and avoid any setup fee.

Note: When you enter into an installment agreement, you must pledge to stay current on your future taxes. The government is willing to help with your 2015 unpaid liability, but it won’t agree to defer payments for later years while you’re still paying the 2015 tab.

Pay With a Credit Card

You can also pay your federal tax bill with Visa, MasterCard, Discover or American Express. However, you may find the IRS installment payment program is a better deal.  Before pursuing the credit card option, ask about the one-time fee your credit card company will charge and the interest rate.

It’s important to file a 2015 federal income return even if you believe you don’t owe anything or can’t pay right now. If you need assistance or want more information, contact your tax adviser.