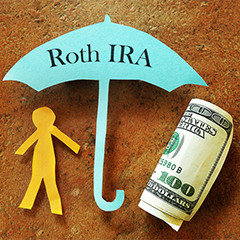 If your employer offers a 401(k), 403(b) or governmental 457 plan, you may be able to set up a designated Roth account through your company’s plan. Then your Roth account will be allowed to receive designated Roth contributions that are taken out of your salary through so-called “salary-reduction contributions.” Here’s more on why it may be advantageous for certain taxpayers, how this strategy works, and how new IRS regulations add greater flexibility to allocating distributed after- and pretax amounts.

However, the catches to receiving tax-free qualified distributions are twofold: First, the Roth account must have been open for more than five years. Second, you must have reached age 59½ or become disabled before taking distributions from your Roth account.

The first day of the year in which you make your first designated Roth account contribution is when your five-year period is deemed to begin. For example, if you made your first contribution anytime in 2014, the five-year period is deemed to have started on January 1, 2014. In this scenario, you can receive tax-free qualified distributions any time after December 31, 2018, as long as you’re at least 59½ or disabled. If the case of death, your heirs can receive tax-free qualified distributions as long as the five-year requirement has been met.

Important note: Setting up a Roth account makes the most sense if you believe you’ll pay the same or higher tax rates during your retirement years.

You may want to direct designated Roth account distributions at some point to multiple destinations — say, to one or more taxable accounts and one or more tax-favored accounts — using tax-free rollovers. These transactions can be executed using the 60-day rollover rule or via direct rollovers where money is transferred directly between accounts. Favorable IRS rules generally allow you to allocate after-tax (tax-free) amounts from nondeductible contributions and pretax (taxable) amounts from deductible contributions and account earnings to the various destinations to achieve the best tax results.

The following example illustrates how the now-eliminated rule that required distributions from designated Roth accounts to be treated separately could lead to unfavorable tax results.

The woman quits her job and arranges for a $50,000 disbursement to close out the designated Roth account. This is not a qualified designated Roth account distribution, because she’s not age 59½, disabled, or dead. So, if she puts the entire $50,000 into a taxable account with a bank or brokerage firm (or straight into her pocket), the woman will owe federal income tax on the $20,000. She’ll probably owe the dreaded 10% early distribution penalty on the $20,000 and any applicable state income taxes, too.

As you can see, the unfavorable separate distribution rule would have resulted in the woman owing taxes on the $12,000 of pretax money that’s deemed to have gone into her taxable account (or pocket). She also might have owed the 10% penalty tax and state income tax on the $12,000.

Fortunately, under a recently amended IRS regulation, separate distribution treatment is no longer required when part of a disbursement from a designated Roth account is directly rolled over tax-free into one or more eligible retirement accounts and part is sent to the account owner.

Now, to achieve the best results, you can follow the taxpayer-friendly rules to allocate after-tax and pretax amounts between the destinations. The following example illustrates how the new guidance adds greater flexibility to allocating distributed after- and pretax amounts.

Example 2: New, more flexible rule for designated Roth distributions. Now that the separate distribution rule no longer applies, the woman in the previous example has a more tax-favorable option for allocating her distributions. Pursuant to IRS Notice 2014-54, she can treat the $30,000 that was transferred into the taxable account (or her pocket) as consisting entirely of after-tax (tax-free) dollars, and she can treat the $20,000 that was directly rolled over into her Roth IRA as consisting entirely of pretax dollars.

Under the new guidance, she would owe no federal income tax on the designated Roth account disbursement and no 10% early-distribution penalty or state income taxes. In addition, she’ll be eligible to take the $20,000 out of her Roth IRA through tax-free qualified Roth distributions once she reaches age 59½ (or becomes disabled).

The amended final regulation applies to distributions from designated Roth accounts that are made on or after January 1, 2016. However, you can also elect to follow the favorable amended final regulation for distributions that were made on or after September 18, 2014, and before January 1, 2016. Contact your tax adviser for more information about how the new guidance applies to your Roth accounts.