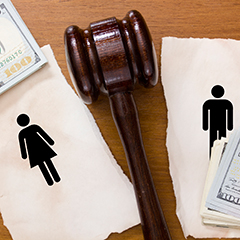 In this article we will discuss two appellate court cases that teach valuable lessons that apply when valuing a business interest in divorce. Legal precedent related to the use of expert witnesses and business appraisals in divorce tends to vary from state to state. But it’s important to monitor case law across the country for emerging trends, especially if you encounter a case that involves a financial issue that hasn’t been addressed by courts in your jurisdiction.

Appraisals Based on Limited Information

The husband (Arun Chattree) owned and operated Community Behavioral Health Center (CBHC), a mental health service company in Ohio. His wife (Mona Chattree) hired an appraiser who valued CBHC at approximately $1.9 million. Arun delayed sending key documents needed to complete the appraisal and denied the appraiser access to the company’s facilities and personnel. So, the expert’s report was late, and he failed to appear at deposition.

Because Arun only provided the expert with financial statements and tax returns from 2005 to 2008, the appraiser’s analysis “was not subject to the development or reporting standards set forth in the American Institute of Certified Public Accountants Statement of Standards for Valuation Services No. 1 (AICPA) nor the valuation standards as promulgated by the National Association of Certified Valuation Analysts (NACVA).”

The trial court adopted the expert’s value, despite these limitations. On appeal, Arun argued that the appraiser’s report and testimony should be excluded from evidence, citing the expert’s lack of familiarity with the business intricacies and operations of CBHC as grounds for exclusion.

The Ohio Court of Appeals ruled that Arun had “invited” the asserted shortcomings by delaying discovery and denying access to company resources. Chattree demonstrates that courts may overlook an expert’s deviations from professional standards and appraisals based on limited financial information, if the transgressions result from misconduct by the spouse who owns a controlling interest in the business.

In the following case, the husband (Robert Hartline) operated a solo dental practice in Tennessee for more than 30 years. Appraisal-related issues in this case include:

Was the wife’s expert qualified to testify as a business valuation expert? The wife (Janice Hartline) hired a CPA who had earned the Certified Valuation Analyst (CVA) appraisal designation from the National Association of Certified Valuation Analysts (NACVA). Although Robert’s practice was the first dental office she had valued, the expert had previously valued other businesses, including a medical practice. She also relied upon the guideline transaction method, an established valuation technique, to value the dental practice. So, the Tennessee Court of Appeals ruled that the trial court did not abuse its discretion in relying on the expert’s testimony.

What’s the value of the practice? Robert appraised the business himself, based on the net value of its assets and liabilities, and he concluded that the business was worth $100,000. However, neither the trial court nor the appellate court found this to be credible.

Janice’s appraiser valued the business between $468,000 and $500,000, excluding its real estate. Her appraisal included several intangible assets that weren’t reported on the practice’s balance sheet, including a trained workforce, patient charts and accounts receivable.

The court notes that there’s a fine line between the “personal goodwill” associated with an individual practitioner and the “business goodwill” linked to its staff, equipment, and location that could be assumed by another practitioner. The court ruled that all goodwill should be excluded from the marital estate in this case, because when valuing unincorporated solo professional practices, the ability of the business to continue without the owner is speculative. The practice might have possessed elements of business goodwill if the practice had been incorporated, was owned by more than one practitioner, or had pre-established contracts.

Because the trial court originally accepted the value set forth by Janice’s expert, the case is remanded to the lower court to resolve this matter.

Guidance that Extends Beyond State Lines and Beyond Divorce Court

It’s important for attorneys and appraisers to understand and communicate state laws, relevant valuation-related issues, and legal precedent. But emerging case law, such as Chattree and Hartline, could have implications in other jurisdictions that have limited case law involving similar businesses.

For example, about half of the states specifically exclude the personal goodwill of professional practices from marital estates, but a few are still undecided on this issue. The proper treatment of goodwill varies significantly from state to state. Hartline makes an important distinction between the goodwill associated with solo practices and larger professional firms.

Both cases also point out the importance of hiring qualified business valuators who use reliable, accepted methodology. The Supreme Court has ruled that an attorney may challenge the qualifications or methodologies of expert witnesses (Daubert v. Merrell Dow Pharmaceuticals, Inc.(113 S.Ct. 2786, 1993). Increasingly, valuation experts in divorce cases face challenges under Daubert. If appraisers are deemed unqualified or fail to use generally accepted valuation methods, they might not be allowed to testify.

In conclusion, judges universally show little mercy for spouses who own a controlling interest in a business and subsequently use that control to withhold information from their spouses that is necessary to perform a valuation.

As Chattree demonstrates, judges will not tolerate misconduct, such as delays and denied access to business resources during discovery because it compromises fairness in divorce proceedings. As another example, these sentiments also could extend beyond divorce to disputes between controlling and minority shareholders.

« Made in America: The Pursuit of Life, Liberty and Global Opportunities
Damages Expert Stumbles Over Causation »