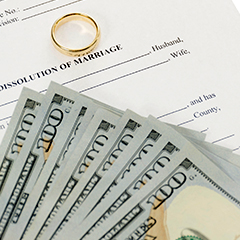 Double counting remains a preoccupation for divorce courts across all jurisdictions. Recently, the Iowa Court of Appeals affirmed the trial court’s decision to circumvent the problem by endorsing one expert’s use of the asset approach to value the owner spouse’s eye clinics. Using an income approach runs the risk of counting the owner spouse’s future earning capacity twice, the trial and appeals courts said.

Income vs. asset approach. The husband was an ophthalmologist and the sole owner of three closely held professional corporations. At trial, the parties focused their valuation disputes on the two profitable businesses and agreed that the third entity had a value of zero and debts amounting to $390,000.

For the valuations, the wife’s expert “primarily” used an income approach that considered goodwill. The analysis was based on the history of profit and prospect for profit for each business. He concluded that the first business was worth nearly $4.2 million and the second clinic approximately $1.2 million.

The husband’s expert relied primarily on an asset approach and valued the businesses twice. Under the earlier, March 2013, valuation date, the first business was worth slightly over $1.2 million and the second was worth $300,000. Using information based on a later, August 2013, date, the expert arrived at a lower value for both businesses: $970,000 for the first business and $190,000 for the second practice. He said the decrease in value had to do with the changing healthcare laws. Also, the second business had experienced considerable turnover in optometrists. Statements from the husband suggested that he was trying to hire replacements but might have to close the second clinic.

The wife also introduced financial statements the husband had given to a lender before and around the time of separation. In the documents, the husband claimed a net worth of between $10 million and $14 million.

Expert fails to adjust downward. The trial court dismissed the financial statements as “not probative of the actual value of a business.” These types of statements, the court said, were “commonly used in cases like this to gain an undeserved advantage over a business loan applicant by exploiting the loan applicant’s exaggerations of his or her net worth to convince the lender that he or she is credit worthy.”

The court also said it would consider goodwill in setting spousal support due to the wife. It said it favored the valuations of the husband’s expert because he used primarily an asset approach. “Because [the husband’s] earning capacity will be accounted for in setting spousal support, it would be improper to count it twice by using the income approach to value the corporations.”

Specifically, as to valuing the second entity, the trial court noted that the wife’s expert failed to make a downward adjustment to account for the business’s 60% collection rate. Moreover, when valuing the business by the income approach, the expert failed to consider serious staffing problems and the attendant decline in income. The valuation proposed by the husband’s expert was “more realistic,” the court said. The court noted that, even though the resulting value might seem conservative, it was appropriate considering evidence that the business in the year of trial was not the same as in the years immediately preceding the present year. The odds that the husband would close that business or that the business would return to prior profitability were about even.

In terms of spousal support, the record showed the husband had a net income before taxes of over $750,000, $1.2 million, and $1.4 million in the three years preceding trial. In terms of the more successful first business, the husband’s expert determined a salary of $900,000, which exceeded the husband’s current wage of $500,000 and the three-year average of $324,000.

Appeals court modifies spousal support. The wife appealed the trial court’s decree at the state Court of Appeals, attacking both the business valuations and the spousal support order.

In terms of the business valuations, she claimed the trial court’s failure to adopt her expert’s methodology and conclusions led to an inequitable distribution of property. She also contended that the trial court failed to consider goodwill attributable to the businesses in valuing the entities.

Here, the trial court explicitly stated it would consider the enterprise goodwill in determining spousal support, the appeals court observed. Moreover, to avoid counting the husband’s earnings capacity twice, the trial court expressly said it preferred the valuations from the husband’s expert as these were based on the asset approach, as opposed to the income approach. For these reasons and the fact that the trial court’s valuations were within the permissible range of evidence, the appeals court upheld the business valuations.

But the Court of Appeals disapproved of the trial court’s spousal support order. Considering the long marriage and the wife’s limited earnings capacity, she was entitled to traditional, or permanent, spousal support providing her with “support comparable to what [she] would receive if the marriage continued.” Although she “overstated” many of the expenses and included items in her budget for which she was not and would not be responsible in the future, the district court awarded an amount that failed to be equitable, the appeals court said. To award her $25,000, as per her request, was fair. It was best to broach step decreases related to the husband’s retirement in a future modification action.