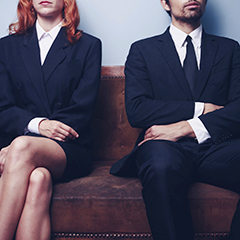 Since Bernier v. Bernier, a Massachusetts divorce case in which the state’s highest court required that a valuation for equitable distribution purposes use a hybrid tax-affecting model to account for an S corporation owner’s personal taxes on company profits, few marriage-dissolution decisions have followed up on the tax-affecting issue. Recently, the Minnesota appeals court entered the debate, and its opinion shows a court that seems both receptive to adopting the technique and noncommittal.

Some 30 years before the husband and wife separated, which was in 2010, he founded a company designing and manufacturing custom metal gas-burner equipment for use in fireplaces, grills, furnaces, and commercial ovens. The business was organized as an S corp, and he was the sole owner. Accordingly, the company did not pay corporate taxes, but he was liable for personal taxes on any corporate profits.

At trial, the question of whether to tax affect or not in valuing the business became a major bone of contention between the parties. Both sides offered expert testimony to bolster their positions.

Wife’s expert cites case law. The husband’s expert computed the fair market value of the company by using a single-period capitalization method while tax affecting estimated future earnings. In other words, he quantified the effect of the personal tax liability on a hypothetical buyer by determining and applying a hypothetical tax rate to estimated earnings. This approach reduced the projected future earnings and the resulting fair market value (FMV). By his calculation, the business was worth nearly $2.3 million.

The wife’s expert used the discounted cash flow (DCF) approach without tax affecting and obtained a $6.5 million value. He based his decision not to tax affect on the Gross U.S. Tax Court decision. In Gross, the taxpayer’s expert tax affected the company’s earnings by an assumed 40% corporate rate, as if the company were a C corporation, even though it was an S corp. The Tax Court rejected the approach, noting “the principal benefit that shareholders expect from an S corporation election is a reduction in the total tax burden imposed on the enterprise … and we see no reason why that savings ought to be ignored as a matter of course in valuing the S corporation.” See Gross v. Commissioner, T.C. Memo 1999-254, aff’d, 272 F.3d (6th Cir. 2001) (available at BVLaw).

In addition, he referenced a Minnesota district court decision related to a forced buyout in which the trial court rejected tax affecting for a different reason: Assuming a hypothetical sale, the company most likely would be sold to another S corp not to a C corp.

Here, without explaining its position on tax affecting, the district court adopted the method that the wife’s expert used but adjusted some of its components to settle at a value of $3.7 million. (The appellate opinion says the adjustments were of no consequence to the appeal.)

Appeal advocates for Kessler model. The husband appealed the decision at the Minnesota Court of Appeals. The district court erred in refusing to use the after-tax value for its valuation of the company and overvalued the company by approximately $700,000, he contended. For one, the cases the wife’s expert cited in support of not tax affecting were not divorce cases. “[N]ational case law makes clear that in order to arrive at an accurate value, the [c]ourt must tax affect the business,” the husband claimed. He advocated for the hybrid tax-affecting approach that the Delaware Court of Chancery developed in Delaware Open MRI Radiology Assocs. v. Kessler and that the Massachusetts Supreme Court applied specifically in the marriage dissolution context in Bernier.

However, the reviewing court acknowledged that no Minnesota appellate court had decided the tax-affecting issue in the divorce context, and it allowed that the husband’s position had “some weight,” even though he “overstates the level of support” for it.

Kessler, the court explained, also was not a divorce case but a combined appraisal and fairness action. Asked to assess the fair value of company stock, the Delaware Court of Chancery assumed a dividend rate of 15% and a personal income tax rate of 40% to impute a “predividend” rate of 29.4%. Applying this rate to the earnings of the pass-through entity measures “with the greatest practicable precision” the fair value of the going concern, the Chancery concluded.

The Massachusetts Supreme Court subsequently adopted the Kessler model in the Bernier divorce case, the appeals court explained. Specifically, in Bernier, the trial court had adopted the husband’s valuation, which tax affected at a hypothetical full corporate rate of 35%. The Supreme Court found this approach unreasonable since it significantly undervalued the businesses, two supermarkets. At the same time, the failure to tax affect an S corp at all would artificially inflate its value by overstating the retaining shareholders expected rate of return. (The decision did not resolve Bernier because a change in the federal income tax treatment of corporate dividends raised issues the Supreme Court initially failed to address.)

No categorical rejection of tax affecting. Where did these cases leave the Minnesota appeal? The Court of Appeals agreed that they provided support for the tax affecting the husband’s expert did. But, the court continued, this was not the end of the discussion. As an error-correcting court, it had to decide whether the district court’s refusal to tax affect was an abuse of discretion. It was not. For one, the husband’s expert admitted, “the issue of tax affecting is an open debate.” Also, the difference between divorce and nondivorce cases that the husband highlighted was “superficial” and of no consequence to the heart of the issue: how to determine the value at which a business would change hands between a hypothetical willing buyer and a hypothetical willing seller.

The husband’s argument that ignoring the personal taxes of an S corp owner would result in overvaluation was not persuasive. Referencing comments from Nancy Fannon and Keith F. Sellers on pass-through entities, the court noted that, in valuing C corps, the courts, the IRS, and the valuation profession for decades have accepted the practice of ignoring the effect of personal tax liability. Therefore, the appeals court continued, “we do not find it unreasonable to employ the same practice for the valuation of S corporations in a hypothetical transaction.” Finally: “Whether to do so is for the experts to explain, the parties to prove, and the district court to decide.”

In a last-ditch effort, at oral argument, the husband cautioned that a failure to adopt a pro-tax-affecting stance meant the wife’s expert would continue to testify in upcoming divorce cases and “no district court would ever find tax affecting to be appropriate.” The appeals court disagreed. Litigants should not read its decision to stand for the proposition that “tax affecting should never be considered.” The Gross case did not set down a bright-line rule. “Indeed, Gross actually advocated for tax affecting under the right circumstances,” the Court of Appeals maintained. It cited with emphasis the Tax Court’s statement: “If … the discount rate is assumed to be an after-shareholder-tax rate of return, then the cash-flow should be reduced (‘tax affected’) to an after-shareholder-tax amount.”