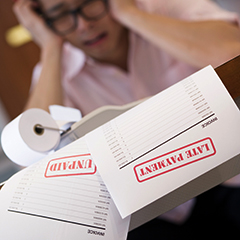 As a Maine-based small business owner, you may be wondering if you can write off bad debts at tax time. Since cash-basis companies don’t recognize revenue until it’s received, and therefore wouldn’t have anything on the books to deduct, only businesses that record income on an accrual basis can write off uncollectible accounts. These accrual-based businesses recognize revenue when it’s earned so when they have delinquent accounts, they may be faced with having to pay taxes on money they’re owed but may never collect.

The good news is that if you have an accrual-based company, and are able to determine a debt is worthless, you can write it off in that same year, eliminating it from your taxable income.

The catch is that small business owners must make reasonable efforts to collect the amount due. You should keep a record of any communication with the debtor for the purpose of collecting.

Remember that you don’t have to wait until the bill is actually due to deem it worthless if you can show that there is no hope of collecting on the account. For example, a debtor filing bankruptcy is pretty good evidence that an unsecured debt is at least partially uncollectible.

The end of the year is right around the corner, and business owners should really increase efforts to get rid of bad debts. Even if you aren’t able to collect any money due to your company, you should be able to deduct uncollectible amounts.

Contact Filler & Associates for more information about bad debts, and other tax planning strategies, that can be implemented before December 31st.