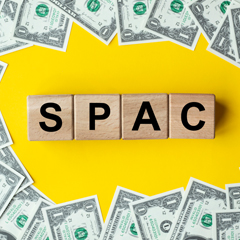 Special purpose acquisition companies (SPACs) provide an alternate route for start-ups to access public markets instead of initial public offerings (IPOs). Roughly 200 SPACs debuted in 2020, drumming up close to $64 billion in funds. In 2020, there was as much capital raised through SPAC offerings as in the prior 10 years. That momentum has continued in 2021. Here’s what you should know before investing in a SPAC.

Essentially, SPACs are shell corporations listed on a stock exchange to acquire a private company, thereby making it public without going through the traditional IPO process. A SPAC has no operational functions. It doesn’t produce any products, sell any goods, or offer any services. Typically, a SPAC’s only assets are the funds contributed by investors.

But don’t be fooled by the term “shell company,” which is often associated with illegal activities. A SPAC is a legitimate businesses structure, typically created by venture capitalists, institutional investors, and hedge fund managers. In recent years, high-profile individuals, including billionaires such as Richard Branson and former baseball player Alex Rodriguez, have sponsored SPACs.

The Securities & Exchange Commission has also approved SPACs, though they must meet the usual disclosure requirements and satisfy other legal formalities. It’s much easier to register for an IPO with a shell company that only holds cash than it is for an operating company that owns various operating assets and liabilities.

SPAC investors usually don’t know what the eventual target company will be. So, investing in a SPAC is similar to writing a blank check for an unseen product. For this reason, SPACs are sometimes called “blank check companies.”

SPAC buy-ins are generally priced at about $10 a share. Once the SPAC has accumulated the necessary funds, the money is transferred into an interest-bearing trust account until the SPAC management team is ready to act. They spend their time researching, identifying, and locating potential targets that are ready to go public via an acquisition.

After the SPAC shareholders vote to approve a deal, the acquisition of the company is completed. At this point, investors can exchange their SPAC shares for shares of the merged company or redeem the shares. If an investor redeems his or her shares, the SPAC will return the initial investment, plus the interest that accumulated while the funds were held by the trust. Of course, the SPAC sponsors also take their cut, which is usually about a 20% stake in the merged company (or companies).

There’s a deadline for SPAC sponsors to consummate a deal. Generally, they have two years to wrap things up. Otherwise, the SPAC will be liquidated, and the money will be returned to the investors.

SPACs were traditionally seen as a last resort by companies that expected to run into fundraising problems. Now they’re the flavor of the day.

The current financial environment has created opportunities for SPAC sponsors. The COVID-19 pandemic and other geopolitical concerns have resulted in market volatility, causing some companies to postpone IPOs. A SPAC provides an alternate method for businesses to access the public markets without the hassles associated with a traditional IPO.

A SPAC may help a growing company generate fast cash in just a couple of months as opposed to the lengthy and more stressful IPO process. Furthermore, with a SPAC merger, the target company can negotiate its own fixed valuation with the SPAC sponsors.

But there are some potential downsides. Notably, even though a sponsor’s profile might disclose an industry specialty, SPAC investors buy shares without knowing what the acquisition target will be or how the acquired company will perform. In addition, the due diligence for SPACs may not be perceived to be as comprehensive as the procedures used to size up regular IPOs.

Also, some critics say that SPAC sponsors aren’t necessarily encouraged to find the best deal, possibly resulting in an overpayment. Although SPACs have generally performed well in recent years, some returns haven’t measured up favorably in the latest bull market. And some private companies that have merged with SPACs are now struggling to comply with the financial reporting requirements for public companies.

Plus, sponsors have two years before a merger must be finalized. Once a deal is lined up, SPAC shareholders could reject the target company. In those cases, your two-year waiting period may never pay off — you’ll just get your cash back plus a small interest payment from the trust.

Clearly, SPACs aren’t for everyone — especially not novice investors. However, they may be appropriate for sophisticated investors looking for an edge. Before you jump on the SPAC bandwagon, contact your CPA or financial professional for guidance.