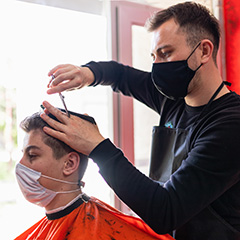 COVID-19-related damages cases are making their way through state and federal courts. Plaintiffs typically are businesses that have suffered economic losses because of various mandatory shutdowns. They file claims with their insurance agency, which frequently denies coverage for business interruption losses. However, more often than not, courts have sided with the defendant insurance company and dismissed the plaintiff’s case or ruled against the business owner. In the instant case, several barbershops operating in Texas challenged the insurance company’s rejection of their claims under policies that were essentially identical. The court agreed with the insurer that the policies, which included a virus exception, did not provide coverage for loss caused by COVID-19 or other causes related to the excluded event, i.e., COVID-19.

The plaintiffs owned barbershops. The defendant insurance company, State Farm Lloyds (State Farm), issued policies to insure the plaintiffs’ properties. As the provisions in the policies that were relevant to this litigation were essentially identical, the court did not analyze each plaintiff’s policy separately.

On Feb. 11, 2020, the World Health Organization announced a new disease called COVID-19 that was caused by the most recently discovered coronavirus. The virus spread rapidly and has resulted in a global pandemic.

In the United States, the outbreak, in its early stages, caused many local and state governments to shut down nonessential businesses to limit the spread of the virus. In Texas, where the instant case is being litigated, county and state officials issued multiple executive orders in March 2020 and April 2020 that required certain businesses, including the plaintiffs’ barbershops, to remain closed to protect the health of the community. The authorities did not consider barbershops essential businesses or businesses exempted from the shutdown orders.

The plaintiffs suffered loss of income due to the mandatory shutdowns and filed claims with State Farm seeking coverage for business interruption losses. State Farm, without investigating the claims, denied the plaintiffs’ requests. Its denial letter stated the policies included a virus exception that precluded coverage of “loss caused by enforcement of ordinance or law, virus, and consequential losses.” Further, State Farm said, under the policy, there had to be “physical damage to the property, within one mile of the described property.” Also, the damage had to be “the result of a Covered Cause of Loss.” Under the virus exception, a virus is not a covered cause of loss, State Farm argued.

The plaintiffs then filed suit in state court to contest the insurer’s denial of coverage. The claims were breach of contract, noncompliance with the Texas Insurance Code, and breach of the duty of good faith and fair dealing. The defendant succeeded in removing the case to federal court, which, at this stage in the proceedings, ruled on the defendant’s motion to dismiss the plaintiffs’ case.

The parties argued over the language in several policy provisions.

In the “Covered Causes of Loss” section, State Farm said it would “insure for accidental direct physical loss to Covered Property” unless the loss was excluded.

The policies contained an express exclusion for “[v]irus, bacteria or other microorganism that induces or is capable of inducing physical distress, illness or disease.”

The policies also included lead-in language to the virus exclusion that said State Farm would not insure for a loss regardless of “whether other causes acted concurrently or in any sequence within the excluded event to produce the loss.”

Finally, the policies had a “Civil Authority” provision that applied to a “Covered Cause of Loss” and provided payment for actual “Loss of Income” caused by an order of civil authority that prevented or prohibited access to the insured’s property as a result of physical damage to property in the proximity of the insured’s property.

This breach of contract case was subject to Texas law. It required the court to interpret the policies under the applicable contract interpretation standards. Citing case law, the court noted the “paramount rule is that courts enforce unambiguous policies as written.” Further, a court must “honor plain language, reviewing policies as drafted, not revising them as desired.”

In asking the court to dismiss this case, State Farm said coverage under this policy was only available if: (1) there were an accidental direct physical loss to the insured property; and (2) the loss was not excluded.

Here, there was no direct physical loss because the plaintiffs based their business interruption claim on the shutdown orders. The plaintiffs did not show their businesses were “tangibly ‘damaged’ per se,” the insurer said. Even if the plaintiffs were able to show this type of damage, their claim would not be covered under the virus exclusion, which was unambiguous and was added to the policies in response to the SARS pandemic in the early 2000s, State Farm contended.

The plaintiffs countered the language in the policies did not require tangible and complete physical loss. It allowed for partial loss of the properties, including the loss of use resulting from the governmental orders. Moreover, to circumvent the virus exclusion, the plaintiffs argued the orders, not the virus, caused the direct physical loss. Further, they said the exception did not apply because there was no virus present on the premises. Also, the Civil Authority provision applied because various governmental entities issued the orders to protect public health and welfare.

Ahead of its analysis, the court said it “sympathizes with Plaintiffs’ situation” but had to grant the defendants’ motion to dismiss the case.

The court said the policies were explicit in their requiring an accidental, direct physical loss to the property. The court agreed with the plaintiffs that there was case law from various state and federal courts that found physical loss even when there was no tangible destruction to the property. However, the court said it found more persuasive the line of cases that required the plaintiff to show tangible injury to the property. “It appears that within our Circuit [5th Circuit], the loss needs to have been a ‘distinct, demonstrable physical alteration of the property.” (citing Hartford Ins. Co. of Midwest v. Mississippi Valley Gas Co.)

The plaintiffs did not plead a direct physical loss to their buildings, the court concluded.

The court agreed with the insurer that, even if the plaintiffs had shown direct physical loss to their properties, they still would not prevail on their claims because of the virus exception contained in the policies.

The court noted that the parties “vehemently” disagreed on how to read the lead-in language to the virus exception. The court found the language “unambiguous and enforceable.” The plaintiffs pleaded that COVID-19 was “in fact” the reason for the shutdown orders and was the underlying cause of the plaintiffs’ alleged losses, the court said. “While the Orders technically forced the Properties to close to protect public health, the Orders only came about sequentially as a result of the COVID-19 virus spreading rapidly throughout the community.” The presence of the virus was “the primary root cause” of the temporary closures of the plaintiffs’ businesses, the court noted.

The lead-in clause to the virus exception excluded coverage of the plaintiffs’ losses, the court concluded. Further, the Civil Authority provision, which applied to a “Covered Cause of Loss,” was not applicable, the court said.

“While there is no doubt that the COVID-19 crisis severely affected Plaintiffs’ businesses, State Farm cannot be held liable to pay business interruption insurance on these claims” under the plain language of the insurance contract between the parties, the court decided.