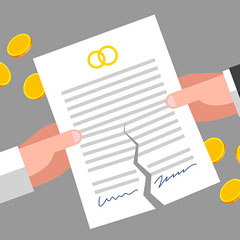 In divorce cases, appreciation of separate property is one of the most complex issues whose analysis can be challenging for attorneys and valuators. A recent Tennessee appeals court decision is noteworthy for explaining the framework courts in this jurisdiction use to decide whether the non-owner spouse has a claim to the increase in value. Further, the appeals court ruling shows how the valuation expert successfully handled a situation in which the opposing side refused to comply with discovery requests and appeared to hide assets.

Contribution to increase in value

A focal point in the divorce proceedings was a liquor distributorship which the husband’s father had started and in which the husband and his two brothers each owned a one-third interest. All three brothers also worked in the business. The husband was the operations manager and vice president, who handled communications and financial matters as well as the company’s inside operation. When the brothers acquired their respective interests, the business apparently was operating at a loss. But, during the marriage, the company grew into one of the state’s largest wine and spirits distributors. In 2012, before the wife filed for divorce, the company sold itself for over $10 million. Each brother received nearly $3.7 million for his shares.

In addition, the husband was a venture capitalist who bought, managed, and sold assets whose value also became a contentious issue.

At trial, both parties offered testimony from business valuators.

On appeal, the husband argued the trial court erred in classifying the increase in value as marital property. The Tennessee Court of Appeals rejected the argument, pointing to the extensive analysis the trial court performed on this issue and all the evidence that showed the husband had the authority to delegate power and to engage in negotiations that resulted in the successful sale of the business.

Use of tax appraisals acceptable

The husband, at trial, and later on appeal, also challenged the valuation of several pieces of real estate. The trial court adopted the values the wife’s expert had proposed, which were based on tax assessments for the relevant year. The expert explained where he found the data on which his opinion was based (State of Tennessee’s Comptroller of the Treasury’s Real Estate Assessment Data website).

At trial, the husband sought to exclude the testimony, arguing the wife’s expert was not a real estate appraiser and therefore was not qualified (“competent”) to give an opinion. The trial court dismissed the objection, noting the husband would be able to cross-examine the expert on this issue. And the husband’s attorney did so.

The husband also presented opposing evidence by testifying that the fair market value of the property was lower because of the condition of the property.

The Court of Appeals found the trial court did not err in admitting the wife’s expert. There was no dispute that he was qualified as an expert, and the trial court “accepted him as such.” The appeals court noted that, under case law, a tax appraisal to value a property “has been held to be competent evidence of value of real estate property.” Further, the trial court’s value determination was within the range of values the parties proposed and therefore was not error, the Court of Appeals said.

Royalty determination has a logic

The wife’s expert, who also was a forensic accountant, also found that the husband had a security interest in a patent, including the right to license the patent. There was evidence that a manufacturer that produced products that used the patent offered $175,000 in 2016 to the owner of the patent—a partnership in which the husband, according to tax returns, owned a 35% interest. The offer was in exchange for transferring all intellectual property rights in the protected technology to the manufacturer. Also, in prior years, the husband had received hundreds of thousands of dollars in royalties from the manufacturer.

At trial, the husband testified that he and his partners had rejected the offer. The marital balance sheet he submitted to the court stated the value of his interest was zero.

The wife’s expert, without more information, valued the husband’s royalty interest at 35% of $175,000, i.e., $61,250. The trial court accepted this opinion. The Court of Appeals said the evidence supported the expert’s opinion. Therefore, the trial court did not err in relying on it.

Another contentious issue was the valuation of the husband’s investment in an energy company (by the husband’s later admission, an oil well) during the divorce proceedings.

The wife’s expert uncovered the investment during discovery and asked the opposing side for more information about the investment. He received no response. As a result, the expert used the original investment amount, $150,000, to value the husband’s interest.

The husband never provided testimony as to the nature of the company in which he invested or its location. He testified, however, that, because of the decrease in crude oil prices, he had received no income from the investment. He maintained that the fair market value of his investment was zero.

During cross-examination, the husband’s counsel tried to make the wife’s expert admit that it was error to use the investment price as the fair market value of the interest where oil prices had dropped considerably over the past few years.

The expert stuck to his position, noting that he did not know what kind of oil investment the husband had made. “I don’t know what it was because the information wasn’t provided.” Further, the expert did not concede the point that, if the investment depended on the price of oil, it probably was not worth as much now that oil prices had fallen.

Rather, he responded: “I wouldn’t agree with that. If he [the husband] bought oil futures expecting oils to go down, they would have tripled his investment.”

The husband’s cross-examination did not succeed in derailing the wife’s expert, and the trial court adopted the expert’s value of the initial investment, $150,000, as the value of this asset.

On appeal, the husband claimed the expert’s valuation was “not based on generally accepted valuation methods.” Therefore, the trial court erred in adopting it.

The Court of Appeals found this argument unpersuasive, noting that the wife’s expert had asked the husband for pertinent information about the investment, but the husband had refused to answer. Using the amount of the initial investment as the value of this marital asset was “no infirmity” in this instance, the appeals court said. “To adopt Husband’s argument would effectively reward him for his failure to produce the information which was sought by Wife; this court will not countenance such a result.”

The Court of Appeals concluded the expert’s opinion had a basis in the facts. It said the trial court was confronted with two opposing opinions and had discretion to accept the one by the wife’s expert.

The Court of Appeals upheld the trial court’s classification, valuation, and division of marital assets as to those assets.

« COVID-19 Relief: Overview of the New CARES Act
Now May Be a Good Time for a Roth Conversion »