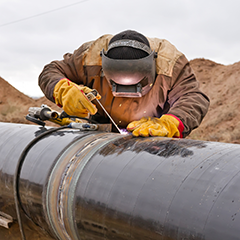 In re Appraisal of Columbia Pipeline Grp., Inc.

In a statutory appraisal case featuring a publicly traded company, the Court of Chancery, after an exhaustive evaluation of the sale process, found the deal price was the best evidence of fair value. It said neither side met its burden of proof to justify a downward or upward adjustment of the deal price. (Throughout the opinion, the court gives great attention to the burden of proof and asks whether the parties were able to meet it.)

The contested merger closed in July 2016. The subject was Columbia Pipeline (Columbia), a midstream company that developed, owned, and operated natural gas pipelines and related assets. The buyer was TransCanada Corp. (TC). The deal price was $25.50 per share. Columbia’s plan to sell itself attracted a number of possible buyers, but management and the board soon favored TC. Aspects of the sale process were problematic. Key Columbia negotiators had conflicting incentives, held meetings with TC without the board’s approval, and made confidential disclosures to TC about the competition.

DCF is ‘second best’ only

The court found in the instant case there were “objective indicia of deal-price fairness.” The merger was an arm’s-length transaction with a third party; the board had no conflicts of interest; other buyers, when given a chance to pursue a deal, did not do so; and Columbia extracted price increases during the negotiations. Although the petitioners had identified real flaws in the sale process, the facts of the case, when compared to those in DFC Global, Dell, and Aruba, allowed for the conclusion that the deal price was a persuasive indicator of fair value, the court said.

At the same time, the court found TC had failed to prove that the deal price included synergies. Contemporaneous evidence showed that the deal price was “comfortably” within TC’s DCF valuation of Columbia, exclusive of synergies, the court said. It also dismissed the petitioners’ argument that Columbia’s value had risen in the time between the signing of and closing of the merger.

Both parties offered expert testimony on the validity of the trading price as an indicator of fair value, but the court declined to spend much time on it, noting that Delaware precedent made clear a reliable trading price was not a prerequisite to a determination of fair value based on the deal-price-minus-synergies metric.

The court gave no consideration to the DCF-based result of the petitioners’ expert and declined to explore the valuation inputs in detail, noting that the DCF here was only a “second-best method” to determining fair value since there was a reliable market-based indicator.