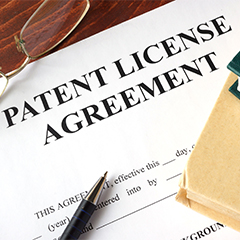 The plaintiff sued the defendants over the infringement of two patents covering a cooling system for computer processing units. The plaintiff’s damages expert calculated a reasonable royalty using the Georgia-Pacific framework. The method centers on the construct of a hypothetical negotiation to determine what kind of agreement the parties would have entered into just before infringement began. As a starting point, the expert used an actual patent license agreement the plaintiff had made with a third party and which, the expert said, resulted in an effective rate of between 10% and 19%.

Although the midpoint of the range was 14.5%, the expert decided for the parties in dispute a reasonable royalty would have been slightly higher—16%—based on her analysis of the relevant Georgia-Pacific factors. The plaintiff’s per-unit profit on its cooling units was an important, though not the only, factor, the expert considered.

The jury found liability and awarded the plaintiff damages based on a 14.5% royalty.

In a post-trial motion, the defendants unsuccessfully asked the trial court to set aside the damages award, arguing the jury’s damages findings lacked support in the evidence.

The defendants then appealed the award with the Federal Circuit, claiming the plaintiff expert’s analysis relied too much on the patent holder’s per-unit profit. They conceded that “profits may be considered as a factor in the reasonable royalty calculation.” However, they said, the profit factor “predominated and virtually subsumed [the plaintiff’s] entire damages case.” Also, the plaintiff expert’s calculation would make lost profits damages no longer worth pursuing by patent owners.

The Federal Circuit found no evidence the expert used an improper legal methodology. Further, being able to account for profits in a reasonable royalty analysis did not take away the incentive to pursue lost profits damages, the Federal Circuit said. Unlike a reasonable royalty analysis, which had to consider the interests of both sides, a lost profits analysis had a singular focus: the patent owner’s interests. Therefore, it might generate a higher award, the court pointed out.

There was substantial evidence to support the jury’s finding in favor of a 14.5% royalty rate, the Federal Circuit concluded.

« Let’s Take a Closer Look at New Business Tax Reforms
Large Employers: What Are the Deadlines for Forms 1094-C and 1095-C? »