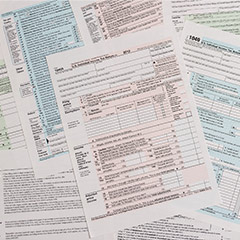 The most significant tax legislation in decades has passed. The new tax reform law is commonly referred to as the “Tax Cuts and Jobs Act” (TCJA). Now Maine businesses and individuals are trying to digest the details and evaluate how the changes will impact their tax situation.

Fortunately, your tax advisors can help you figure things out. Let’s start with a basic overview of what’s covered in the new law. (Except where noted, these changes are effective for tax years beginning after December 31, 2017.)

In general, the law significantly reduces the income tax rate for corporations and eliminates the corporate alternative minimum tax (AMT). It also provides a large new tax deduction for owners of pass-through entities and makes major changes related to the taxation of foreign income. But it also eliminates or reduces many business tax breaks.

Some of the key business-related changes include:

For Individuals and Estates

For most individual tax brackets, the new law makes small reductions to income tax rates, and it significantly increases individual AMT and estate tax exemptions. But there’s also some bad news for individuals: The TCJA eliminates or limits many tax breaks. In addition, much of the tax relief for individual taxpayers will be available only temporarily.

Here are some of the key changes; except where noted, these changes will sunset after 2025:

Additionally, the new law permanently eliminates the individual mandate under the Affordable Care Act requiring taxpayers not covered by a qualifying health plan to pay a penalty. The elimination of the individual mandate is effective for months beginning after December 31,2018. Also permanent is the expansion of tax-free Section 529 plan distributions to include those used to pay qualifying elementary and secondary school expenses, up to $10,000 per student per tax year.

In this time of change, Filler & Associates or your tax advisor can be a valuable resource, helping you stay atop the latest developments.

It’s important to realize that more tax reform may be coming, and the new tax law is broad-reaching and complicated. Other proposals that Republican congressional leaders have discussed would address retirement and education savings, reorganize the IRS, delay some taxes funding the Affordable Care Act (such as the medical device tax and the health insurance provider fee), prevent abuses of the earned income tax credit and extend the benefits of some tax credits for renewable energy property, nuclear energy production and biodiesel.