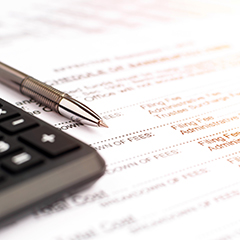 The U.S. Tax Court recently agreed with the Internal Revenue Service that management fees a corporation paid to its three shareholders over a three-year period were not deductible since none of the fees were paid “purely for services” and the petitioner failed to show the fees were “ordinary, necessary, and reasonable.” Rather, they represented disguised distributions, the court found.

The petitioner operated an asphalt paving business and had three shareholders. The company’s president owned 20% of the stock, an S corporation held 40%, and a C corporation also owned 40%. The court noted that the determination of the deductibility of the management fees was to be determined on an individual shareholder basis.

Under the applicable regulations, a corporation may deduct ordinary and necessary expenses, including salaries and other compensation, incurred during the tax year for the purpose of conducting a business or trade. Management fees are only deductible if they are payments “purely for services.”

The court also pointed out the petitioner failed to provide evidence, documentary or otherwise, for the cost or value of any particular service. “Petitioner has to connect the dots between the services performed and the management fees it paid. Petitioner failed to do so,” the court said.

The court also examined the fees paid to the individual shareholder, i.e., the president of the company. It noted the individual shareholder is an employee of the company and provides services on an ongoing basis. However, the total compensation paid to him in his role as president must be reasonable. Here, the court said, the payments were not for any services beyond his responsibilities as president. The IRS, the court said, provided persuasive expert testimony that the executive was already overcompensated by his salary and bonus alone.

This case was a clear win for the IRS and an epic failure on the part of the petitioner, which presented its case poorly. It is as if the petitioner over the years dared the IRS to catch it if it could, and the IRS did.