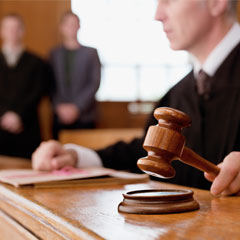 The taxpayer sued the federal government for a refund, arguing she had overpaid income taxes on stock she had received as part of settling a lawsuit against her former employer. She initially relied on the value in the settlement agreement but later claimed this value was inflated. The court agreed, relying on extensive analysis from the taxpayer’s expert that laid bare the company’s dire financial situation around the valuation date and identified the only method that could generate a positive value for the stock.

The taxpayer had worked for the subject company. In October 2012, she sued for disability discrimination and wrongful termination. The company was a closely held corporation, and its stock was not publicly traded. While the lawsuit was pending, the taxpayer asked to see financial information for the company because it could affect the stock valuation, but the company did not respond to her discovery requests. By the time the taxpayer settled her suit with the company, in April 2014, she was unaware of the company’s negative financial condition. As part of the April 2014 settlement, the taxpayer received a payment of $1.5 million that was to be made in the form of 650,000 shares of GTC common stock. The settlement agreement said the per-share value of the stock was $2.38. In August 2014, the parties signed a written agreement, and, about two weeks later, the company issued the shares at $2.38 per share value. The taxpayer relied on the asserted value when filing her 2014 income tax return. She later filed an amended return that stated the stock’s fair market value was only $0.57 per share. After the Internal Revenue Service denied the claim for a refund, the taxpayer filed a lawsuit against the U.S. government in federal district court.

Only the taxpayer offered expert testimony from an experienced accredited business valuator. The government’s witness was a valuation specialist from the IRS who, in 2016, had written a memo to the IRS agent reviewing the taxpayer’s amended return and, later, in 2018, wrote a second memo critiquing the taxpayer expert’s report. The court said it did not have enough information to qualify this witness as an expert. It also noted some inconsistencies in his statements. Essentially, the government’s position was that the stock value was $2.38 per share.

In contrast, the court said the taxpayer’s expert “performed a thorough and credible analysis” of the company’s common stock on the valuation date (date when the shares were issued to the taxpayer).

The expert’s review of the company’s business operations and financials showed that, in 2014, during settlement negotiations, the company was “cash strapped” and “desperately looking for cash.” A month before the parties settled, the company had negative equity of approximately $200 million and retained earnings of -$633 million, the expert said. Under the Altman Z-Score formula, which is a tool for predicting the probability of a company’s going into bankruptcy within two years, the expert determined the company was “severely distressed,” with a high likelihood that it would go under. He also explained that, of all the valuation methods he applied, only the market value approach allowed him to come up with a positive value for the stock. He considered transactions involving four similarly sized companies that were generally in the same industry to determine the fair market value for the subject company’s stock was $0.91 per share. He found a 25% minority interest discount and an 18% discount for marketability were appropriate, resulting in a value of $0.57 per share for the taxpayer’s stock on the valuation date.