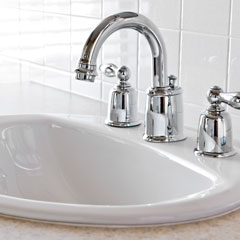 Earlier this year, a New York trial court presiding over a buyout dispute featuring an online wholesaler of faucets, sinks, and fixtures rebuffed the departing shareholder’s valuation. His expert’s discounted cash flow analysis collapsed on account of unreasonable projections that the company had used to secure a loan from a bank.

The company, founded in 2007, was an importer and distributor of sinks, faucets, plumbing fixtures, and accessories. It conducted online sales through retailers and, at the relevant time, was working on branding and getting major retailers such as Home Depot to feature its products. The company showed considerable early growth in sales (from $21 million in 2012 to $36 million in 2015) but also negative cash flow.

The petitioner owned 24% of the company’s shares. The other two owners (individual respondents) held a 25% and a 51% interest. After business relations broke down, the petitioner initially asked for dissolution of the company and damages. Under New York’s BCL 1118(a), the remaining owners elected to buy out the petitioner. The issue at trial was the fair value of the petitioner’s interest as of Sept. 20, 2015, the day before the petition was filed.

Both parties offered testimony from valuation experts who used both an income and a market approach but reached very different value conclusions. Under the income approach, the petitioner’s expert valued the company at $21.9 million; under the market approach, he arrived at a value of almost $38.8 million. Averaging the two values, he said the company was worth $30 million; the value of the petitioner’s interest (undiscounted) was $7.2 million. In contrast, the respondents’ expert, using a single-period capitalization method and cash flow, valued the company in the range of $5.9 million to over $6.1 million; under the market approach, using Pratt’s Stats (now DealStats), he generated a value range of between $5.3 million and $6.1 million. Giving greater weight to the income approach, he valued the company at $6.05 million.

Projections were a major flash point in the valuation proceedings. The petitioner’s expert used a DCF model based on projected earnings the company had used a few months prior to the valuation date to qualify for a bank loan up to $7 million that could be extended to $10 million. The petitioner noted one of the respondents, a CFA who served as the company’s controller, prepared the projections. The projections and other representations from all owners to the bank put the value of the company at about $30 million. It’s a federal crime to provide false statements to a bank. The petitioner argued the bank relied on this information to grant the loan; he suggested that, therefore, this $30 million valuation must be credible.

The respondents’ expert noted that the company had never met a single projection, not in 2014 or 2015. Based on his examination of financial evidence, the projections were not reliable, making the opposing expert’s DCF model unreliable.

The success of the company, as shown by the rapid growth in sales, “was not as great as petitioner contended … nor was it accurately predictive of future success or of the true value of [the company],” the court said. It added that the projections “were, put mildly, ambitious, and, in fact, were overstated. In reality, the value of the business was never $30 million.”

The court declined to comment further on the statements made to the bank or their significance in obtaining the loan. But the court noted, “[T]he representations were not accurate.” It said the respondents’ expert used a sound methodology and provided “a realistic assessment” of the company’s fair value that was consistent with evidence as to the company’s “successful business model as well as its debt and cash flow issues.”

Adopting the $6.05 million valuation and applying a 5% DLOM, the court concluded the petitioner’s interest was worth about $1.4 million.