Employee or Independent Contractor? The Rules May Be Getting Simpler. 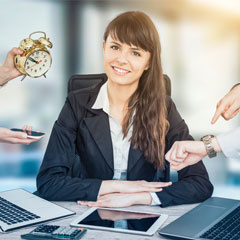 In this past election, voters in California approved legislation that allowed companies in the so-called “gig economy” to continue classifying their workers as independent contractors, opposed to employees. This issue isn’t exclusive to California, however, as the topic of classifying workers as independent contractors or employees has gained national attention, especially with the rise of ride-sharing companies such as Uber.

However, some employers misclassify workers as independent contractors when in reality they should be defined as employees. This can result in penalties and even litigation. However, the Department of Labor (DOL) is proposing new, simplified rules that they hope will clarify how workers should be classified, which in turn should reduce the risks associated with misclassifying workers, while increasing efficiency and job satisfaction.

The Fair Labor Standards Act (FLSA) doesn’t provide a clear definition on classification of workers. So, currently, independent contractor status standards are largely based on federal courts’ interpretations of the FLSA. While the U.S. Supreme Court has weighed in on this issue with an “economic realities” standard, various lower courts have interpreted its meaning differently.

The DOL is hoping to bring clarity to the issue with its proposed rule. In it, they try to prioritize factors used to determine the economic reality of a given work arrangement. Specifically, two existing factors would be promoted to “core” factor status:

The greater the worker’s control over the work, and the greater the opportunity for profit and loss, the greater the likelihood that independent contractor status exists. According to the DOL, “These factors help determine if a worker is economically dependent on someone else’s business or is in business for himself or herself.”

Three other factors are added to the mix, but are described merely as “additional guideposts.”

A high degree of skill would point toward independent contractor status, while a high degree of permanence would point toward employee status. There are exceptions. For example, a worker can have a long-term relationship with a company, but that wouldn’t necessarily point to “permanence” if there’s no indication that the company has implied to the worker that the work will continue indefinitely.

Being part of an “integrated unit of production” indicates employee status. So, what does that mean? An assembly line worker would easily qualify, but an Uber driver would not. The issue isn’t whether the work being performed is essential to the employer’s business. Rather, under this test, “discrete, segregable services for individual customers is not part of an integrated unit of production,” the proposed rule explains.

It also states that requiring workers to do certain things doesn’t necessarily affect the “workers’ degree of control over the work.” Those certain things are “requiring an individual to comply with specific legal obligations, satisfy health and safety standards, carry insurance, meet contractually agreed-upon deadlines or quality control standards, or satisfy other similar terms that are typical of contractual relationships between businesses.”

Finally, the proposal states that “the actual practice of the parties involved is more important than what may be contractually or theoretically possible.” Simply put, it’s more important what the worker does, than what the worker could do. For example, if workers treated as independent contractors technically have the ability to negotiate their pay, but never exercise that theoretical opportunity, that could help the workers make the case that they should be treated as employees.

It could take several months for the proposed rules to be finalized. Initial reaction from labor-oriented organizations has been negative.  In their assessment of the proposal, the National Employment Law Project said, “The DOL’s anti-worker proposal dramatically and improperly narrows coverage for workers under the FLSA.”

Employers should also be mindful that this rule would only be advisory in nature and lack the authority of a federal law. Thus, it would only be taken into consideration by a judge in a trial, but not be the sole source of authority. With a new administration taking office early next year and the Congressional control still up in the air, the dynamics of labor legislation could change. In addition, employers are also subject to state laws, some of which make it easier for workers to achieve employee status than federal standards.