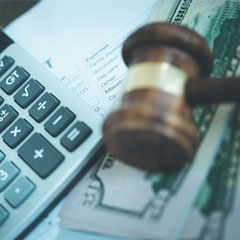 In a gift tax dispute, the U.S. Tax Court recently found for the taxpayer when it rejected the unusual reasoning and methodology the Internal Revenue Service’s trial expert proposed to keep low the discounts applicable to the nonvoting membership units in two limited liability companies (LLCs).

In late 2013, as part of his estate plan, the taxpayer transferred his 99.8% interest in an LLC called Rabbit to a grantor retained annuity trust (GRAT) and his 99.8% interest in another LLC, Angus, into an irrevocable trust. The GRAT transfer was structured to avoid gift tax liability. The taxpayer’s 99.8% interest in both LLCs represented class B nonvoting units. A management entity that belonged to the taxpayer’s daughter solely owned the remainder 0.2% interest. This interest represented class A voting units. Both LLCs held securities, investments, and promissory notes. Neither of the two entities’ class B membership units were ever offered for sale or sold since the transfers.

The taxpayer filed a Form 709 gift tax return with valuations an appraisal firm had performed. In January 2018, the Internal Revenue Service (IRS) issued a deficiency notice, finding the taxpayer had understated the FMV of both companies’ class B units.

To account for the noncontrolling, nonmarketable aspects of the class B units, the firm preparing the original appraisal applied discounts for lack of control (DLOC) of 13.4% and 12.7% and a 25% discount for lack of marketability (DLOM) for both companies. The taxpayer’s trial expert prepared his own valuations and applied slightly higher DLOCs.

The IRS’ expert proposed a theory of what the hypothetical buyer and hypothetical seller would do under the facts, which aimed to minimize the applicable discounts. Per the expert, a reasonable buyer of the 99.8% interest made up of class B units would try to maximize the buyer’s economic interest by acquiring the remainder 0.2% interest consisting of class A units. Doing so would consolidate control of the respective company and further increase the value of the class B units by decreasing the discount a hypothetical buyer would pursue. To buy the class A units, the hypothetical buyer would have to pay a “reasonable” premium, which the expert determined to be 5%. Basically, he subtracted the premium amount from the undiscounted net asset value of the LLCs. The result was a significantly higher valuation for each company than those the taxpayer’s appraisers offered.

The Tax Court, citing Estate of Giustina, in which the very court had cautioned against “imaginary scenarios as to who a purchaser might be,” found the IRS expert’s approach was not supported by facts, case law, or among peers. “We are looking at the value of class B units on the date of the gifts and not the value of the class B units on the basis of subsequent events that, while within the realm of possibilities, are not reasonably probable, nor the value of the class A units,” the Tax Court said.