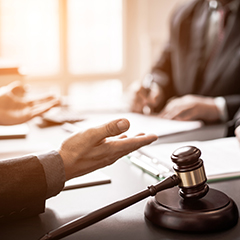 This damages case, which centered on an employee’s breach of fiduciary duties and other misconduct toward her former employer, and which went to arbitration, includes an informative discussion of the difference between head start damages and saved development costs. Both the federal district court and 3rd Circuit Court of Appeals found the head start award was based on a valid damages theory and methodology for calculating the benefit to the wrongdoer as a result of her misconduct.

The employee worked for nearly two decades for Sabre in the United States and China. Sabre was a technology provider to the travel and tourism industry. In 2013, the employee became a consultant for the company and entered into an employee intellectual property and confidentiality agreement (EIPC agreement). The contract forbade her to disclose or use the company’s confidential information for her own benefit or the benefit of a third party.

The EIPC agreement also included a non-compete clause and restricted the employee’s ability to interfere with the company’s relationships with customers, employees, and contractors for a period of time, both during and after her employment with the company.

More than a year later, Sabre sued the employee in New Jersey (where she had worked as a contractor) for breach of the EIPC agreement and breach of her fiduciary duties to Sabre. The employee was able to remove the lawsuit to federal court and compel arbitration. An arbitrator ultimately found for the company on a number of claims and awarded the employer two types of damages. The employee was required to disgorge $200,000, representing the salary she had received from Sabre during the period in which she had been disloyal to the company. Under the “head start” measure of damages, the arbitrator awarded the company nearly $1.2 million in damages. In a nutshell, this award represented the benefit to the employee derived from her misconduct based on her equity interest in the Chinese competitor.

However, the arbitrator rejected recovery under another category of damages for saved development costs, finding the evidence Sabre provided was too speculative.

The arbitrator also found the employee liable for breach of contract and other violations but did not award any additional damages related to the additional claims. The district court confirmed the arbitration award.

The employee then appealed the district court’s confirmation of the arbitration award with the 3rd Circuit Court of Appeals, arguing, in essence, that the arbitrator “manifestly disregarded” various aspects of the applicable Texas law when it awarded the damages. The 3rd Circuit disagreed.

The flashpoint was the head start damages award. The arbitrator accepted the calculations of the company’s damages expert, which were premised on the theory that the employee’s breach of fiduciary duty to Sabre (acquiring and using the company’s confidential information and trade secrets and, improperly, recruiting its personnel), gave the Chinese competitor a two-year head start, which that company would not have had but for the employee’s misconduct. In other words, the head start damages quantified the benefit to the Chinese company and to the employee who held an equity stake in it as a result of the employee’s misconduct.

The expert determined that the incremental value to the Chinese company was over $1.7 million, whereas the incremental value to the employee was about $1.2 million. The arbitrator, in adopting the expert’s damages determination, found this was “an accepted and credible approach” with which to calculate the benefit to the employee from the misconduct.

Among the numerous arguments the employee made to contest the damages, she claimed the head start damages calculation was flawed because it was based on Sabre’s erroneous assumption that head start damages and saved development costs are “the same thing.” The employee then contended the arbitrator mistakenly allowed Sabre to recover saved development costs, without there being any evidence of those costs.

The appeals court rejected the argument. It noted that, in his report, Sabre’s expert made clear that head start damages and saved development costs were separate damages theories that sought recovery for two different benefits the wrongdoer received as a result of the misconduct. Head start damages, the appeals court said, reflected the benefit to the employee from the increase in the Chinese company’s value “as a result of the company’s being two years further along than it otherwise would have been in developing and commercializing its products and services.”

The 3rd Circuit noted that, in the instant case, the arbitrator found that Sabre failed to prove saved development costs and, instead, awarded head start damages based on Sabre’s expert’s damages calculation.

The argument that the expert’s valuation was precluded under Texas case law also had no traction with the 3rd Circuit. Rather, the reviewing court found there was no ruling “that shareholder equity is categorically an impermissible method of establishing the value of a company.”

Moreover, the court dismissed the employee’s claim that Sabre’s expert wrongly assumed that all or most of the Chinese company’s value as of the valuation date was attributable to products that were traceable to the employee’s misconduct. The employee claimed that other products unrelated to her misconduct also were in development as of the valuation date. However, the 3rd Circuit found the employee did not provide a basis for concluding the expert’s assumption was incorrect.

The 3rd Circuit Court of Appeals concluded that, despite many assertions of legal error, the employee failed to identify a governing legal principle in Texas law that the arbitrator knew of but chose to ignore when it awarded the former employer head start damages. There was no evidence to conclude the damages “were awarded in manifest disregard of the law,” the 3rd Circuit said. It confirmed the head start damages award.