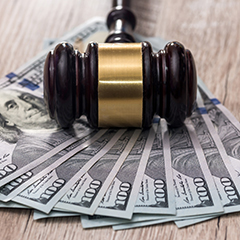 In a noteworthy decision, a Connecticut appellate court recently found the trial court double dipped when it divided the marital assets and calculated spousal support. Although attorneys from both sides had alerted the trial court to the risk of double dipping, the court awarded the non-owner spouse half of the value of the owner’s businesses and then considered all of the income from the businesses in setting the alimony amount.

‘Only significant stream of income’

During the marriage, the husband built two companies that he owned and managed. The businesses provided the only source of income for the husband.

The trial court credited the valuation of the wife’s expert, who determined the companies were worth $904,000. The court also found the husband’s gross annual income from the two companies was $550,000. It awarded the husband complete ownership of both businesses and ordered him to pay the wife 50% of their value. In addition, the court granted the wife lifetime alimony of $18,000 per month. This award, the court decided, was not modifiable as to the amount and the duration.

In a post-judgment motion, the husband asked for clarification as to the court’s finding that the husband’s annual income was $550,000 per year. Specifically, he wanted to know whether this amount referred to the husband’s earning capacity. If so, was it earning capacity as to his two wholly owned companies “or what [the husband] can realistically be expected to earn elsewhere independent of said companies?”

The court responded the $550,000 was not “a finding of earning capacity, but of (gross) income from [the husband’s businesses].”

On appeal, the husband argued the trial court improperly counted a marital asset twice, for the purpose of property division and the determination of spousal support. The appellate court agreed. “The general principle is that a court may not take an income-producing asset into account in its property division and also award alimony based on that same income,” the reviewing court said. It noted, however, that there was no bright-line rule as to when a court double counted an income-producing asset for marital distribution and support awards. “In marital dissolution cases, each situation is fact specific and the court, in formulating orders, must take into account all of the assets in the marital estate as well as other statutory considerations.”

The reviewing court remanded “for further proceedings on all financial issues because of impermissible double counting by the [trial] court.”