The Clock May Be Ticking on Corporate Stock Redemptions 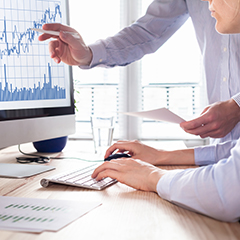 Though the individual federal income tax rates established by the Tax Cuts and Jobs Act (TCJA) aren’t scheduled to expire until the end of 2025, some analysts think they could be repealed sooner. Next year’s presidential election and concerns over an increasing national deficit are two reasons why tax breaks may not stick around for long. So, taxpayers may want to look into strategies to take advantage of today’s favorable tax rates while they still can.

One approach private business owners could take is to redeem corporate stock, which means your company buys back some or all of your shares for cash. While these redemptions convert theoretical wealth for actual assets, they can also result in some impactful tax consequences. That’s why it’s important to understand how these corporate stock redemptions are treated for federal income tax purposes.

In general, cash payments by C corporations to buy back shares are classified as corporate distributions and are treated as:

However, there are some available exemptions that treat redemption payments as proceeds from a stock sale. These exemptions include:

If the redemption is classified as a stock sale, you recognize a capital gain or loss equal to the difference between the redemption payments and the basis of the redeemed shares.

If you don’t have any significant basis in the redeemed stock or any significant capital losses, there’s often just a minor distinction between it being treated as a distribution or a stock sale. That’s because both are currently taxed for high-income taxpayers at the same maximum federal rate of 23.8% (the 20% maximum rate for long-term capital gains and qualified dividends plus 3.8% for the net investment income tax).

C corporation stock redemption payments received this year get a favorable tax treatment — even if they’re treated as corporate distributions. But that may not be the case in the coming years.

Redemption of S corporation stock is generally treated as a stock sale. However, if the S corporation has E&P from an earlier period as a C corporation, a corporate distribution treatment applies, and the rules get more complicated.

When corporate distribution treatment applies, all or part of the redemption payments can potentially be treated as taxable dividends (to the extent of the corporation’s E&P). However, if an exception is available, stock sale treatment will apply even if the S corporation has E&P.

If you’re looking to minimize the taxes you’ll owe on payments from a corporate redemption, you may want to do it sooner than later. Current tax rates are fairly favorable and higher maximum federal income tax rates on both dividends and long-term gains could be in the near future.

Below are maximum federal rates apply to individual recipients of stock redemption payments made in 2018 through 2025:

But those are set by current tax law. It’s possible that a new president or a shift in Congress could adjust these rates much sooner than 2026. By waiting to redeem your shares, you risk the possibility of facing a bigger tax bill. You should also consider that 2019–2020 redemption will trigger current tax liabilities versus deferred tax liabilities if you defer a redemption to a future year.

As you can see, there’s a lot to consider and many complexities to navigate when redeeming your corporate shares. If you need help clarifying it all, reach out to us at Filler and we’d be happy to help.