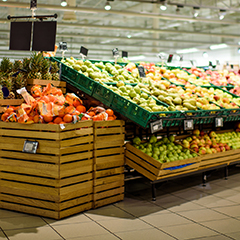 A protracted Minnesota buyout dispute involving the heirs to a local grocery store empire may have reached the end. The state appeals court affirmed most of the district court’s rulings, including the buyout order and fair value determination. The valuation trial featured two veteran appraisers and a judge well versed in appraisal jurisprudence. The experts’ conclusions were miles apart, causing the court to discount them as biased in favor of the expert’s respective client. The court performed its own appraisal and determined a fair value that was between the expert figures. The appeals court ruling commends the district court for its efforts to achieve a fair and equitable valuation.

This intra-family dispute centered on three family businesses (the Lund entities). Lunds Inc. is a chain of upscale grocery stores that operated in the Twin Cities area under “Lunds & Byerlys.” Lund Food Holdings functions as a management company and has subsidiaries operating grocery stores and food-processing companies. Lund Real Estate Holdings develops and rents commercial real estate and leases some of the properties to the other two entities. Russell T. Lund Sr. built the business in 1939.

The plaintiff was Kim Lund, one of the founder’s four grandchildren, who indirectly owned a 25% interest in the entities. The key defendant was Tres Lund, Kim’s brother, who was the only one of the four siblings actively involved in running the companies.

Starting in the early 1990s, Kim informed Tres and other executives in charge of the Lund entities that she was looking for an “exit strategy.” When her efforts to structure a separation of the assets went nowhere, she sued Tres, the companies, and several other individuals. In December 2014, she alleged breach of fiduciary duties and other wrongdoing. At that time, she asked for damages, a buyout of her interests or, in the alternative, the sale of the entities. In July 2016, Kim filed a buyout motion pursuant to the applicable statutory provisions, which the court granted in early October 2016. When the parties failed to reach an agreement on fair value, a valuation trial ensued. The court decided the valuation date was Oct. 2, 2016.

In brief, the plaintiff’s expert used a discounted cash flow analysis for all three companies, a guideline publicly traded company analysis for all three companies, and a merged and acquired company analysis for the grocery-related businesses. He determined the combined fair value was $321.6 million, which translated into approximately $80.4 million for the plaintiff’s 25% interest (adjusted to exclude certain shares, the value of Kim’s interest was about $76 million).

The defendants’ expert also used a DCF and guideline public-company analysis to value the grocery-related companies. He weighted the results equally. He used the adjusted net asset value approach to value the real estate business. He calculated a combined value of $91.3 million, which amounted to $21.3 million for the plaintiff’s interest.

The court found the DCF was the most appropriate method to value the grocery businesses, finding no companies were sufficiently similar to the Lunds & Byerlys stores. The court observed that the experts, even when using the same method and drawing on similar information, achieved very different outcomes. The court noted that the experts disagreed over most inputs and assumptions and decided the experts were generating valuations “tailored to suit the party who is paying them.” In conducting its own DCF analysis, the court drew on the most credible parts of each expert opinion.

For the real estate holding company, the court adopted the defense expert’s NAV-based valuation. The court concluded the total fair value for the three entities was $191.5 million, which translated to $45.2 million for the plaintiff’s interest. The court rejected the defense argument that “extraordinary circumstances” justified the use of a 10% marketability discount. (A digest of Lund v. Lund, 27-CV-14-20058 (J. Bernhardson) (District Court, Fourth Judicial District, Hennepin County, Minnesota) (June 2, 2017), and the court’s opinion are available at BVLaw.

No abuse of discretion

Both parties appealed aspects of the findings with the state Court of Appeals. The defendants contended the district court abused its discretion in allowing the buyout and in determining fair value. The plaintiff contested the district court’s decision to use October 2016 as the valuation date, instead of December 2014. The Court of Appeals rejected all of those arguments.

The defendants’ principal claim was that the trial court erred as a matter of law when it granted the plaintiff’s buyout motion. In rejecting this claim, the appeals court explained that, under the applicable statutory provisions, the district court has the authority to grant equitable relief, including a buyout, if those in control of a company have acted “in a manner unfairly prejudicial” toward another shareholder or member. The court found such was the situation here, where the defendants consistently frustrated Kim’s reasonable expectations of liquidity and financial independence.

The appeals court observed that the record showed, and the defendants conceded, that the plaintiff had communicated a desire for an exit strategy in the early 1990s and that the defendants over decades assured her that planning was underway. The appeals court rejected the defense argument that the defendants’ proposed 2008 partial redemption plan of $8 million raised a genuine dispute as to whether the plaintiff’s expectations were frustrated. According to the Court of Appeals, “offering a single, partial redemption over a 20-year period when all parties understood that Kim would achieve complete liquidity established frustration of her reasonable expectations as a matter of law.”

Further, the law recognizes that minority shareholders “are in a vulnerable position,” allowing courts broad discretion to grant relief, the Court of Appeals pointed out. Here, the district court found the plaintiff was particularly vulnerable as a minority shareholder who had no management rights and “no hand in creating the trust instruments or corporate-governance documents.” In its decision to grant the buyout, the district court also considered the success of the businesses, the risk of creating a burden on them, and the risk of allowing for an unfair wealth transfer to the plaintiff, the appeals court found. “The district court noted the critical need to structure a buyout that would be fair and equitable to all parties,” the Court of Appeals said. Therefore, granting the buyout was not an abuse of discretion.

The plaintiff’s valuation date argument also did not resonate with the appeals court. It noted that, under the applicable statute, when a court grants a buyout motion, the sales price “shall be the fair value of the shares as of the date of the commencement of the action or as of another date found equitable by the court.”

The district court here specifically found that the commencement of litigation “had no bearing on the proper valuation date” and decided to use a date that was nearest to the availability of annual audited financial statements for the business entities, noting the lack of similarly reliable financial data for reported Minnesota buyout cases. Although it was not required to do so, the district court “meticulously explained its reasoning,” the Court of Appeals found. The appeals court concluded the district court’s departure from the default valuation date was not an abuse of discretion.

In sum, the reviewing court upheld the district court’s buyout order, choice of valuation date, and its fair value determination.

« How Much Can Your Business Deduct for Vehicles Placed in Service in 2019?
Is a New Individual Health Plan in Your Future? »