How Much Can Your Business Deduct for Vehicles Placed in Service in 2019? 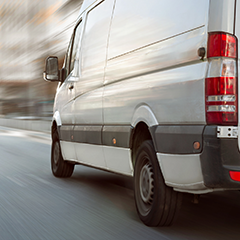 While people are jumping in their cars and hitting the road here in Maine for some summer adventures, you and your small business may be hitting the road in a new vehicle. If you are adding a new car or truck to your business’ fleet, the purchase could qualify for some tax breaks under the current tax law.

Here are a few vehicle tax breaks you should know about.

After 2018, the amounts will be adjusted annually for inflation. Based on current inflation projections, next year those numbers would $1.02 million and $2.55 million, respectively.

Sec. 179 expensing for qualifying asset purchases is phased out on a dollar-for-dollar basis for purchases that exceed the threshold amount. So for 2019, no Sec. 179 deduction is available if your total investment in qualifying property is above $3.57 million.

A “heavy” vehicle is an SUV, pickup or van with a gross vehicle weight rating (GVWR) above 6,000 pounds. You can verify the GVWR of a vehicle by looking at the manufacturer’s label, which is usually found on the inside edge of the driver’s side door where the door hinges meet the frame.

For tax purposes, heavy SUVs, pickups and vans are treated as transportation equipment. That means they qualify for 100% first-year bonus depreciation and Sec. 179 expensing if they’re used for business over 50% of the time. This can give you a big tax break when buying new and used heavy vehicles.

However, if a heavy vehicle is used for business purposes 50% or less, you must depreciate the business-use percentage of the vehicle’s cost over a six-year period.

Passenger vehicles (defined to include light SUVs, pickups, and vans) have less generous tax breaks than heavy vehicles. The inflation-adjusted depreciation limits for passenger vehicles that were acquired before September 28, 2017, and placed in service during 2019 are:

The depreciation limits for passenger autos acquired after September 27, 2017, and placed in service during 2019 are:

If the vehicle is used less than 100% for business, these allowances are cut back proportionately.

Important: For a vehicle to be eligible for these tax breaks, it must be used for business purposes more than 50% of the time, and the taxpayer can’t elect out of the deductions for the class of property that includes passenger automobiles (five-year property).

If you need help with your small business’ taxes or have questions about depreciation deductions on vehicles, contact us here at Filler & Associates.