How to Benefit from the Rising Average Age of American Workers 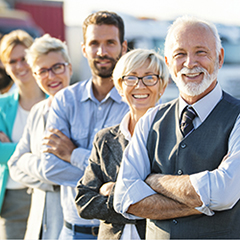 According to the U.S. Bureau of Labor Statistics, one in five workers is aged 55 or older. By 2026, that number is expected to be one in four — meaning the proportion of young workers in the overall labor pool will shrink.

In a state such as Maine — which, according to the U.S. Census Bureau, is the oldest in the nation with a median age of 44.6 years — this trend takes on added significance. If your small business is forced to hire from an older talent pool, will it mean you’re hiring workers who are less capable, skilled or motivated compared to younger workers? Will it negatively affect your business?

Research actually suggests that it won’t.

As workers age, their levels of agility and skills are unlikely to diminish, according to the Gerontological Society of America (GSA). The GSA estimates 85% of the U.S. population in the 65 to 69 age bracket has no health-related impediments to work. That proportion only drops to 81% for the 70 to 74 age bracket. And the majority (56%) of Americans aged 85 and over have no such limitations — although that percentage might be smaller for heavy manual labor.

The GSA recently published a report entitled, “Longevity Economics: Leveraging the Advantages of an Aging Society.” It offers insight into the working world through the eyes of older employees. The report states, “While previous generations may have viewed their 50s and early 60s as their most productive and financially rewarding years, older Americans view their 70s or 80s as ages for making some of their greatest contributions.”

The report also dispels a few commonly held myths about older workers and reveals some of the benefits this growing workforce sector can provide your business. Here are a few examples:

Myth: Older workers expect to earn more.
Reality: Many older workers have already paid for their homes and other major life expenses, such as their children’s education. So, they’re often content to take jobs with less responsibility and, accordingly, lower pay.

Myth: The cost of health benefits for older workers is higher than for younger ones.
Reality: While older workers may individually incur more health claims, they typically don’t use family coverage. And they also may qualify for Medicare coverage. So, they may be less expensive to cover than younger employees.

Myth: Older workers are harder to motivate because they aren’t as financially ambitious or as interested in getting a promotion as younger workers are.
Reality: Compared to their younger counterparts, older workers might be less motivated by financial rewards. But they might find non-financial benefits, such as flexible work hours or extra vacation time, more rewarding — and employers can satisfy these needs at little or no cost.

That last revelation really highlights a major difference between young and older workers. It’s not in their skills or ability or effectiveness — it’s in their motivations.

While younger workers may be more motivated by money and career advancement, according to GSA research, “Older workers are more motivated to exceed expectations than younger workers” and are more deeply engaged in their work than their younger colleagues. In addition, the report credits older workers for their “willingness to contribute to company success through discretionary activities such as working longer hours, being dedicated to the company, and putting more energy into their jobs correlated with lower staff turnover and better company performance.”

So, what inspires older employees to become more engaged than their younger counterparts? A survey of job seekers over age 50 performed by RetirementJobs.com shows that older workers aren’t indifferent to what they are paid in salary and benefits. But they are particularly interested in flexibility, security and stability, independence, autonomy and pure challenge.

Just as employers have learned to maximize the productivity of younger generations with policies such as “casual Fridays” or hosting social activities, you should do the same for older workers. “Employers just need to recognize the differences in motivators at various points across the years of employment,” the report states. “HR innovations can be very effective in supporting longer working lives.”

One way a Maine business like yours can position itself for success in light of this trend is by simply taking a long-term view of your company’s workforce needs. Instead of trying to precisely forecast specific jobs from year to year, focus on long-term goals over the next five or ten years. It’s nearly impossible to predict specific job skills that will be required in the future. Also, you should think in terms of how you can fill and retain workers in broad “job families” and where older workers will fit into the big picture.

The GSA report suggests a few tactical approaches to consider:

The GSA concludes, “By leveraging an aging population in the ‘longevity era,’ economic growth can be enhanced now and continued into the future.” Contact your HR and payroll advisors to help your business capitalize on today’s older (and possibly wiser) workforce.