Does Your Company Allow Vaping on the Job? 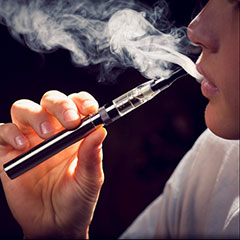 Most employers try to strike a balance between encouraging healthy habits on the part of their employees and acting as a surrogate nanny. But as the use of e-cigarettes has become increasingly popular, the question of whether or not to allow vaping at work can be a thorny one to tackle. According to the Wall Street Journal, “As sales of e-cigarettes surge, the devices have joined polarizing workplace aggravations like microwaved fish, loud ringtones and reply-to-all messages.”

Several large employers — including Walmart, Target, Starbucks, UPS and CVS — have banned in-house vaping. In some states — including California, Massachusetts, New Jersey, New York and Vermont — along with dozens of municipalities, the issue has been settled by state legislatures and city councils, which have banned the practice.

Even one San Francisco-based vaping products maker was recently forced to prohibit its employees from using the company’s own product at work. Many other states have less sweeping anti-vaping laws, such as banning it only in restaurants, bars and hotels.

Two decades after Maine banned smoking in indoor dining establishments, the state — like many across the country — is now trying to figure out how to handle vaping. Just this past April, the state passed legislation that banned vaping devices at public schools. And the city of South Portland has floated the idea of banning the sale of all flavored tobacco used in electronic vaping devices, but that debate has yet to be settled.

Assuming you don’t work at one of the large companies mentioned earlier or have a business that may do work at public schools here in Maine, the decision to permit vaping or not is up to you. Here are some of the arguments made by proponents of vaping in the workplace.

Opponents of workplace vaping offer a few primary arguments of their own. The first is that while it’s not as offensive as cigarette smoke, smells from vaping devices waft around the workplace and are unpleasant to many non-vapers — especially the more strongly flavored products. Also, according to Pennsylvania-based consulting company AllOneHealth, “Some workers find vaping unsettling and disruptive, based simply on how vaping looks.”

In addition, opponents claim that although smoking is more physically harmful than vaping, the latter is still unhealthy. Bolstering that argument is a report issued by the California Department of Public Health entitled, “State Health Officer’s Report on E-Cigarettes: A Community Health Threat.”

Highlights of that report include the following:

Some of these statements may be controversial, however, and not all are accepted by vaping proponents. Also, some of the strongest arguments about vaping pertain to the threat it poses to teenagers. Therefore, it may be more of a public health concern than a workplace policy question.

If you consider both sides of the issue and decide to adopt a vaping ban at your workplace, be sure to implement it thoughtfully — as with any other policy decision.

You could start by reviewing your cigarette smoking policy and how it’s laid out in your employee handbook. You could take the approach of piggy-backing your anti-vaping policy onto your anti-smoking policy. Doing so allows you to highlight the connection between smoking and vaping, and to ensure consistency. For example, if you offer guidelines on smoking breaks and where they can occur, it makes sense to apply the same to vaping.

Take a comprehensive look at the impact of allowing vaping in your workplace. Collect whatever facts you can and weigh them carefully. You might want to get employee input into the issue. Chances are, there will be strong feelings one way or the other, and it could help your decision to know this upfront. Also, don’t forget to consider peripheral issues. For example, if you allow workplace vaping, you’ll need to address the proper disposal of the batteries used in vaping devices.

It’s important to think through how you’ll communicate your policy to your workforce. Be prepared to explain how you arrived at your decision. Not that you need to defend your choice, but if you can’t verbalize why you made the decision, some people may see it as random and may try to challenge it. Incorporate the policy into your employee handbook, then make it easy for employees to access the updated version of that document.