Exploring the Cashless Movement in Retail 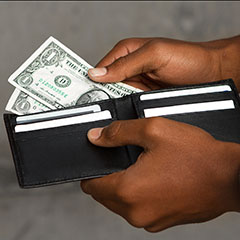 Only 30% of all retail transactions were completed using cash in 2018 — a 40% decrease since 2012, according to the Federal Reserve. And that trend is expected to continue, causing some retailers to stop accepting cash from customers.

Is it legal to refuse cash payments — or even a smart business practice? It depends on where you’re located. In February, for example, Philadelphia’s city council passed an ordinance that requires businesses to accept cash, except for orders placed online or by telephone. New Jersey followed with similar legislation soon after. The laws come amid plans announced by online retail giant Amazon to open cashless brick-and-mortar stores around the country.

As many retailers here in Maine gear up for their busy season, they may be considering joining the cashless movement. Here are a few things they should know first.

When is the last time you paid cash for groceries, gasoline or even a coffee? The answer probably depends on your age and income level. Generation X and people who grew up with cashless payments like Millennials and Generation Z tend to be more comfortable swiping their credit or debit cards or using digital payments such as Venmo, Google Pay or Apple Pay.

But many Americans — like middle-aged consumer and senior citizens — still prefer to pay with cash. Low-income individuals also tend to use cash, as they are less likely to have credit card, bank accounts, smartphones or the needed identification to qualify for digital payments.

It’s for these reasons that Philadelphia stepped in to prohibit retailers from refusing cash payments. “There’s a reasonable segment of people who wouldn’t be able to patronize those stores because they don’t have any kind of credit or debit card,” said Philadelphia Councilman Bill Greenlee after introducing the bill to require cash payments. He argued that, by refusing to accept cash, retailers were sending the message that they didn’t want to do business with low-income or immigrant customers who don’t have bank accounts or an established credit history.

It’s an argument many other local governments are using as the push back against cashless-only operations, and one you should consider if you’re a retailer thinking about going cashless.

Even though going cashless may turn away some customers and is illegal (or may soon be) in some areas, there are clear reasons on why it appeals to some retailers. Many store owners and managers are seeing that handling cash is becoming increasingly costly and time consuming. For example, in places that accept cash, managers must do the following:

In addition to those logistical issues for business owners, cash has a few other flaws. Some customers will spend less if they’re limited to paying with the cash they have on them. Several restaurants say they don’t accept cash because, in large part, it’s dirty and can cause sanitary issues. And, of course, one the biggest issues with cash is that it’s susceptible to theft and fraud.

By comparison, credit or debit cards and other digital alternatives are more convenient, facilitate sales and can dramatically reduce the chance of theft — if the retailer has adequate cybersecurity measures in place to prevent hackers from accessing customer data. In fact, several large retailers, including Starbucks and Walmart, are considering adopting Amazon’s cashless brick-and-mortar business model.

State of the Union (and Maine)

Amazon has indicated, off the record, that it won’t put any of its brick-and-mortar stores in Philadelphia due to the new ordinance. But the City of Brotherly Love isn’t the only place in the country where cash is getting more love.

In March, New Jersey’s Governor Phil Murphy signed into law a measure that prevents retailers from prohibiting cash payments. Bills banning cashless merchants are currently being considered in New York City and Washington, D.C. And Massachusetts has had a similar prohibition on the books since 1978, although the law has seldom been enforced. Currently there’s no such legislation in Maine, but with these cashless bans predominately playing out in states in the northeast, it’s definitely something to keep an eye on.

Right for Your Business?

With Maine not currently prohibiting a cashless business model, local retailers have an important decision to make: Should we still accept cash from customers? There’s no universal “right” or “wrong” answer. But if you’d like to dig into the issue more, and how it may affect your bottom line, contact your financial planner and legal advisors to evaluate the pros and cons before jumping on the cashless bandwagon.