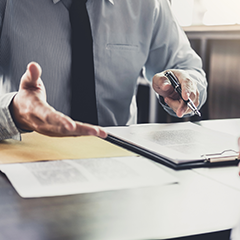 In re PetSmart, Inc.

A statutory appraisal decision from the Delaware Court of Chancery offered a familiar valuation contest between the discounted cash flow analysis and the merger price. Shareholders opposed to the going-private merger of PetSmart claimed that their discounted cash flow analysis was the best indicator of fair value. The company advocated in favor of the merger price. The court’s decision zeroed in on the management projections.

The petitioners’ valuation expert developed a WACC-based DCF analysis that yielded a fair value of $128.78 per share. The company’s expert allowed that financial analysts (and courts) often consider the DCF analysis the “gold standard.” But for a sound analysis, “one must use the ‘expected’ (as opposed to ‘hoped for’) future cash flows of the business,” he said. Here, the management projections were “entirely unreliable.” He concluded the sales price, $83 per share, represented fair value.

‘Telltale indicators of unreliability’: There was a “vast delta between the valuations generated by the parties’ proffered methodologies,” the court noted. It said it would resist the temptation to conclude neither outcome reflected the company’s fair value or to strike a balance between the two results. The appraisal process was adversarial and required it to consider the facts presented, the court pointed out.

There were two key questions: (1) whether the sales process leading to the merger was “fair, well-functioning and free of structural impediments to achieving fair value for the Company”; and (2) whether there was a reliable foundation for the DCF analysis. As to the sales process, the court found the auction “came close to perfection to produce a reliable indicator of PetSmart’s fair value.” The final price was higher than PetSmart stock had ever traded, the court observed. In terms of the DCF, the court stated that the “first key to a reliable DCF analysis is the availability of reliable projections of future expected cash flows.” Here, the projections underlying the petitioners’ DCF analysis were “saddled with nearly all of [the] telltale indicators of unreliability.”

Using the price the petitioners’ expert determined “would be tantamount to declaring a massive market failure occurred here that caused PetSmart to leave nearly $4.5 billion on the table,” the court said. It declined to go there, instead opting to “defer” to the deal price, “because that is what the evidence presented in this case requires.”

« Small Employers: Should You Jump on the MEP Bandwagon?
The IRS Tells Employers How to Report W-2 Scams »