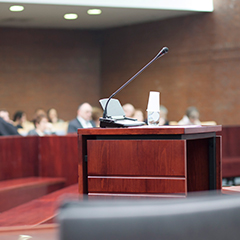 In what is becoming a common practice, the defendants in a potential securities class action filed a Daubert challenge to exclude financial expert testimony at the class certification stage. Although courts are divided whether Daubert should apply at this early stage in the litigation, the court here considered the motion. Many of the defendants’ objections focused on the expert’s not being a financial economist and lacking academic credentials. The court rejected this line of attack and found the proposed market efficiency analysis and event study were relevant, reliable, and helpful to its ruling on class certification.

The plaintiffs were investors in the defendant company, a broad-line closeout retailer whose stock traded on the New York Stock Exchange. They alleged the company and individual officers had made false and misleading statements to investors that inflated the stock price. Further, while the company was buying back millions of shares of its own stock, the individual defendants and company insiders were selling large quantities of their own stock for a total of over $33 million.

The plaintiffs sought class certification under Rule 23 of the Federal Rules of Civil Procedure. The plaintiffs’ financial expert provided an opinion that the company traded in an efficient market, which was a critical piece of information in terms of establishing the reliance element in a Rule 10b-5 securities claim. The expert also performed an event study to quantify how the stock price reacted to new, unexpected disclosures about the company. In addition, he concluded it was possible to calculate damages on a class-wide basis consistent with the plaintiffs’ theory of liability.

The defendants challenged the opinion under all three prongs of Daubert.

In terms of qualification, they claimed the expert’s opinion was inadmissible because the expert was not a financial economist and lacked the necessary academic background. He was a “professional litigation consultant,” the defendants said, and should not be admitted simply because other courts had done so.

The court rejected the defendants’ arguments, noting that the expert was a chartered financial analyst (CFA) who had over 25 years of work experience with financial valuation and economic consulting firms, including testifying on the issue of market efficiency and damages. If not by education, he was qualified by experience.

Next, the defendants argued the opinion was unreliable in part because the expert’s report cited to case law, which made this an improper legal opinion, and also because the report was prepared for litigation and was not resulting from the expert’s independent research.

The court said it would disregard any part of the expert’s opinion that discussed the expert’s understanding of case law. However, a mere reference to a case does not render the entire opinion inadmissible, the court clarified.

A related issue was the expert’s market efficiency analysis that was based on the five Cammer factors. Courts have adhered to the five-part test, but some financial economists, including the defendants’ expert, a prominent Harvard economist, have argued that only one of the factors (Factor 5) is relevant to market efficiency. As they see it, an analysis based on all factors renders the expert opinion unreliable.

The court noted the difference in opinion between the financial economist community and case law. Since the expert followed the legal standard, the defendants’ objection was not a reason to exclude the testimony. Relatedly, the court dismissed claims the expert’s event study was fatally flawed in part because the expert had not prepared an ex ante hypothesis (i.e., directionality analysis), which the academic literature requires. Further, the court rejected the idea that the event study was biased in favor of finding market efficiency because it included corrective disclosure dates.

Finally, the defendants argued the plaintiff expert’s damages opinion was not sufficiently specific to the facts of the case and, therefore, not relevant. The court acknowledged the expert discussed the general analytical framework applicable in this type of case but pointed out the expert also detailed how the model would be applied to the instant situation and how he would tweak it based on information that became available during the litigation.

If the claim was the expert opinion was defective because the expert had not already prepared a calculation specific to the case, it failed because no such damages analysis was required at this early stage of the litigation, the court noted.

The court said it would consider the expert’s opinion on the larger issue of class certification and denied the defendants’ request for exclusion.