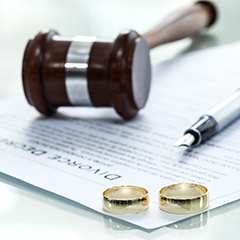 This Michigan divorce case involving an S corporation that was the owner’s separate property raised a number of valuation-related questions, including an issue of first impression: Are the earnings a closely held company retains during the marriage includable in the marital estate, such that the nonowner spouse has a claim to them? In answering this question, the Michigan Court of Appeals rejects all bright-line rules but instead provides a set of guidelines for trial courts to resolve the issue.

Trial court proceeding. The marriage was short. The husband had significant premarital assets, including a company that customized commercial trucks and the property that the company leased. The company was organized as an S corporation. The parties fought over the valuation of the company, specifically the increase in value. Relatedly, the wife claimed that any retained earnings of the business not accounted for in determining the increase in value was marital property and as such divisible.

Valuation dispute. Both parties retained valuation experts. To determine the company’s value as a going concern, both experts’ used an income approach and calculated the company’s EBITDA margin. The experts arrived at similar values for the company at the start of the marriage, but their valuations at the date of separation were eons apart.

The enormous value gap seems to have stemmed from a disagreement over which financial data to use and the formula for calculating the EBITDA margin. In testimony, the husband’s expert said he had interviewed the husband about the company and had reviewed its internal financials. The wife’s expert testified that he had not done this. The husband’s expert concluded that, during the two-year marriage, the company’s value increased by $400,000. The wife’s expert determined the company’s worth had increased by over $2 million.

The trial court credited the husband’s expert. That expert’s calculation was “more detailed” and “involved seeing the site, interviewing the owner of the business, understanding the business in more detail,” the court said. Without analysis, the trial court rejected the wife’s proposition that the earnings the company retained during the marriage were marital property.

Admissibility of expert opinion dispute. At trial, the wife at various points unsuccessfully challenged the admission of the opposing expert report. (The Court of Appeals opinion is vague about some of the underlying facts, which makes it difficult to report on the arguments.)

The wife seems to have argued for exclusion of the report because it included financials that had not been produced and not been placed into evidence. However, it seems the husband’s expert testified that he relied on those records in formulating his opinion and the wife’s attorney cross-examined the husband’s expert on the difference in valuation that was attributable to the contested financials. The wife’s lawyer did not seek to strike the opposing expert’s testimony. In the end, the trial court admitted both the report and the testimony by the husband’s expert.

Husband’s claim. According to the husband, the company represented separate property. Because the wife did not make substantial enough contributions to increase the value of the business, she had no right to any portion of the increase. The trial court erred when it included the increase in value in the marital, divisible estate, the husband contended.

The Court of Appeals rejected this argument. It noted that there was evidence that the wife supported the husband’s efforts to run the company, even though the trial court found the wife did not directly contribute to the company. The appeals court noted the trial court had not determined whether the wife provided sufficient indirect support. But, said the appeals court, “even if [the wife] did not indirectly support [the husband’s] efforts, [his] efforts alone warranted treating the increased value of Arista as a marital asset.”

Wife’s claim. On appeal, the wife claimed that any net income the company had generated and not distributed to the husband during the marriage represented marital property. That amount was divisible at least to the extent the trial court found the company’s value had not increased by an amount equal to or greater than its retained earnings. To support her argument, the wife referred to federal tax law under which the income of an S corp is taxed to the owner. She also relied on decisions from other jurisdictions (not precedent and several dealing with child support formulas) that have held that the retained earnings are the income of the spouse who owns or controls the entity.

The Court of Appeals said the wife’s proposition presented an issue of first impression in Michigan. It noted that, although there was a presumption that property earned by one spouse during the marriage was marital property, “it is not clear that the revenue generated by an entity that is wholly owned by one spouse as his or her separate property invariably constitutes earnings of that spouse.” (emphasis added) The key word that kept coming up in the opinion is “invariably.”

The court first disposed of the tax argument, pointing out that federal taxation and domestic relations are two different things. Congress makes federal tax law, states deal with marital disputes. Both entertain different policy concerns. “So this Court is not bound to ignore [the company’s] separate existence merely because Congress chose not to tax the income of a closely held corporation when it is included in the owner’s personal income for tax purposes,” the Michigan Court of Appeals said.

In terms of rulings from other (foreign) jurisdictions, the court favored decisions that have adopted a case-by-case analysis. A rule that says the retained earnings “invariably” are the property of the entity until distributed is improper, the Michigan Court of Appeals said. The risk is that this bright-line rule would encourage the owner-spouse of a separate entity to hide wealth from the nonowner spouse. However, the court found a rule that requires the inclusion of retained earnings in the marital estate whenever the owner-spouse has control over the distribution of earnings would be equally problematic because such a rule does not consider “ordinary business practices,” that is, respect the owner’s judgment as to what funds he or she needs to maintain the business over time and what funds are available for distribution.

Principles applied to case. The Court of Appeals applied its “totality of circumstances” approach to the instant case and found the trial court did not determine whether the husband unreasonably caused his company to retain earnings. However, the appeals court, in reviewing the record, concluded it was not improper for the trial court to decline to treat part of the retained earnings as marital income. The reviewing court mentioned the husband’s history of being “conservative with his distributions.” He only caused the company to make substantial distributions to him so he could take care of tax liabilities. He said he did not personally receive the distribution. There was no evidence that the husband fraudulently withheld income from the marital estate. Also, the evidence showed that the retained earnings were accounted for in the increased valuation of the business. Accordingly, the wife received a portion of the increase in value attributable to the retained earnings, the appeals court noted.

Notwithstanding the wife’s claim that the expert testimony relied on data that were not in evidence, the appeals court considered the report cumulative to testimony by the husband’s expert, saying the expert had testified to relying on that data and had discussed the reasons for doing so.

Concerning the challenge by the wife to the testimony by the husband’s expert, the Court of Appeals noted the wife had failed to ask the trial court to strike the testimony. The court explained that simply objecting to the admission of the expert’s report did not mean the wife also objected to that expert’s oral testimony. “Therefore, she has not preserved her claim.” The court added that, had the wife objected to admission of the opposing testimony at trial, the opposing attorney would have been able to show that the expert opinion had adequate support in the evidence, that it was based on reliable principles and methods, and that the expert applied the principles and methods correctly, the appeals court said. Also, the husband’s expert apparently had the contested documents in his possession and could have produced them at trial. According to the Court of Appeals, doing so would have satisfied state Rule of Evidence 703, which provides that the factual bases for the opinion may be admitted after the expert testifies. Further, Rule 705 provides that an expert does not have to disclose the underlying facts or data before he or she may offer an opinion, the Court of Appeals said. It added that, if there had been a timely objection and the trial court had insisted that the expert base his opinion on the evidence, the husband’s expert could have modified his opinion at trial, using the records that were in evidence.

The Court of Appeals further noted that it was “doubtful” that the expert opinion would have “materially” changed were it based on the admitted as opposed to the unadmitted figures. To the extent the trial court erred in admitting the expert testimony, this error, too, was harmless, the appeals court concluded.