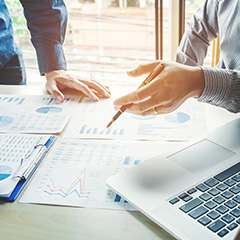 Of all the changes under the Tax Cuts and Jobs Act (TCJA), one of the biggest is the permanent installation of a flat 21% federal income tax rate for C corporations for tax years beginning after 2017. This new 21% applies equally to personal service corporations (PSCs) that were previously taxed more heavily than other C corporations.

This is excellent news if you manage or own a C corporation or PSC. Here are some tax planning considerations for these entities under the TCJA.

Tax planning is now much easier thanks to the reduced federal income tax rate for C corporations because you already know this year’s and next year’s rate: 21%. Thus, the most appropriate strategy for many is to defer income into next year and accelerate deductible expenditures into this year, allowing you to postpone corporate federal income tax bills.

Thanks to other changes included in the TCJA, most small and medium businesses are now allowed to use cash-method accounting for tax purposes. If your business is eligible, cash-method accounting gives you the flexibility to manage your corporation’s 2018 and 2019 taxable income to defer some corporate federal income tax until next year.

Delaying invoices. The general rule for cash-basis taxpayers is you don’t have to report income until the year you receive payment. To take advantage of this rule, postpone sending some invoices so your corporation doesn’t get paid until early next year. Of course, don’t do this if you risk not collecting your money!

Charging recurring expenses before year-end. Charge recurring business expenses that you would otherwise pay early next year on credit cards. Cash-basis taxpayers can claim 2018 deductions although the credit card bills won’t be paid until next year. Note, this favorable treatment is not applicable to store revolving charge accounts, so a business expense charged to your Sears account cannot be deducted until the bill is paid.

Pay expenses with checks, mailing them just before year-end. Cash-basis taxpayers can deduct the expenses in the year checks are mailed, even when they won’t be cashed or deposited until early next year. If it’s a big-ticket expense, send checks via registered or certified mail in order to prove they were mailed this year.

Prepay expenses for next year. As a cash-basis taxpayer, you can deduct prepaid expenses in the current tax year as long as the economic benefit of the prepayment doesn’t extend beyond the earlier of 1) 12 months after the first date on which your company realizes the benefit, or 2) the end of your company’s 2019 tax year (the tax year in which the payment is made).

As an example, your company could claim 2018 deductions for prepaying the first three months of next year’s office rent or the premium for property insurance coverage for the first half of next year.

Make the Most of Bonus Depreciation

The TCJA increases the first-year bonus depreciation percentage to 100% (from 50% for most of 2017) for qualified property that acquired and placed in service between September 28, 2017, and December 31, 2022 (or December 31, 2023 for certain property with longer production periods and aircraft). This break is for both new and used qualified property. As long as this 100% first-year bonus depreciation is allowed, it will be superior to the Section 179 deduction privilege (below) because there are fewer restrictions on bonus depreciation.

The TCJA permanently increases the maximum Section 179 deduction to $1 million (from $510,000 for tax years beginning in 2017) for qualifying property placed in service in tax years beginning after December 31, 2017. The Sec. 179 education phase-out threshold has also been increased to $2.5 million (from $2.03 million under prior law). Both amounts can be adjusted for inflation in future years.

Plus, the TCJA expands the eligible property definition to include certain depreciable tangible personal property used predominantly to furnish lodging. Such property would include beds, other furniture, kitchen appliances, and other equipment used in the living quarters of a lodging facility such as an apartment house, dormitory or any other facility (or part of a facility) where sleeping accommodations are provided and rented out.

There’s also a further expansion of the qualified real property eligible for the Sec. 179 deduction to include qualified expenditures for roofs, HVAC equipment, fire protection and alarm systems, and security systems for non-residential real property.

There are major tax advantages associated with purchasing large SUVs, pickups, and vans. You can generally write off 100% of the cost of a new or used heavy SUV, pickup for van that’s acquired and placed in service in current tax year on this year’s corporate tax return thanks to the unlimited 100% first-year bonus depreciation break for qualified assets that are acquired and placed in service between September 28, 2017, and December 31, 2022.

We’ve written about this before: to take advantage of this, you need to buy a “heavy” vehicle with a manufacturer’s gross vehicle weight rating (GVWR) above 6,000 pounds. Lighter SUVs, trucks, vans, and passenger cars have less generous first-year depreciation deductions. The GVWR specification can usually be found on a label on the inside edge of the driver’s side door where the hinges meet the frame.

The difference is dramatic. For example, if your C corporation buys a $65,000 heavy SUV in 2018, you can write off the entire $65,000 cost in the current tax year thanks to the 100% first-year bonus depreciation break. Both new and used heavy vehicles are eligible for this break.

Meet with a Tax Pro

There are many provisions in the new tax law that help C corporations cut their tax bills. And it also simplifies tax planning in many ways. Your tax advisor can supply more details on what’s covered here and suggest other tax-planning moves for your business.