Will States Conform to the New Tax Rules? 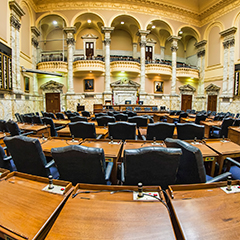 Many state legislatures are now in session. One of the major issues that state lawmakers face this year is whether to conform their state income tax systems to the many changes included in the Tax Cuts and Jobs Act (TCJA). Some states are giving consideration to, or have already adopted legislation to address the following key provisions of the new tax law.

There has been a lot of attention by the media to certain provisions in the TCJA, including the new limit on federal income tax itemized deductions for personal state and local taxes (SALT). The maximum deduction for the combined total of state and local income and property taxes is $10,000 for 2018 through 2015 ($5,000 for married people filing separately). This new federal limit puts pressure on some states to lower residents’ state income tax burdens or find other ways to work around the rules.

However, the bigger issue is whether all the other changes made by the TCJA will be conformed to by state tax systems. In order to simplify filing your state income taxes, many states “piggyback” their state personal and corporate income tax rules onto the federal rules. But when legislation like the TCJA makes big changes to the federal rules, states must decide whether to conform or “decouple.”

Unless the state decouples from the changes, several TCJA changes threaten to reduce state taxable income, resulting in lower tax collections for the state. Examples of pro-taxpayer TCJA provisions that state legislatures will need to decide whether to conform to (reducing the state’s tax base) or decouple from (maintaining the tax base) include:

Liberalized rule for Section 529 plans. The TCJA liberalizes the Sec. 529 plan rules to allow federal-income-tax-free withdrawals of up to $10,000 a year to cover tuition at a public, private, or religious elementary or secondary school. This is a permanent change, for qualifying withdrawals made after December 31, 2017.

Deduction for pass-through business income. The TCJA allows individual taxpayers to claim a deduction for up to 20% of qualified business income (QBI) from so-called “pass-through” businesses for 2018 through 2025. This includes sole proprietorships, partnerships, S corporations and limited liability companies (LLCs) treated as sole proprietorships or partnerships for tax purposes. Limitations apply at higher income levels.

First-year expensing and depreciation for business assets. Under the TCJA, for qualifying property placed in service in tax years beginning after December 31, 2017, the maximum Section 179 deduction is increased to $1 million (up from $510,000 for tax years beginning in 2017), with inflation adjustments after 2018.

Taxpayers do not benefit from all TCJA provisions. Additional federal taxable income, and for conforming states, additional state income tax revenue, will be generated by some of the changes. Examples include:

Business interest expense that’s disallowed under this limitation is treated as business interest arising in the following taxable year. Those amounts that can not be deducted in the current year can generally be carried forward indefinitely. Small and medium-size businesses and certain real estate and farming ventures are exempt from this anti-taxpayer change.

As these examples show, state legislatures have plenty of tax conformity issues to consider this year. Both individual taxpayers and businesses will be affected by tax conformity outcomes. Your tax advisor is atop the latest developments and, as your state tackles these issues, can help determine how you, your family and your business will be affected.

« Misunderstanding of Facts Results in Overvaluation of Fuel Supply Rights
Is an Association Health Plan Right for Your Company? »