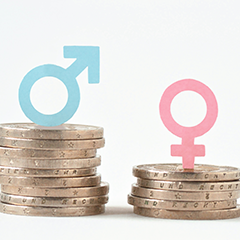 The widespread belief that pay discrimination is rampant in Maine and across the country, regardless of the underlying facts, is what puts many employers at risk for litigation based on charged of unequal compensation. A recent Pew Research poll found 77% of women agreeing with this statement: “This country needs to continue making changes to give men and women equality in the workplace.”

In addition, recent high-profile sexual harassment cases may have generated additional suspicions about pay discrimination. Here’s an overview of the federal law requirements on this topic:

The Equal Pay Act (EPA) was signed into law in 1963 by President John F. Kennedy, with the goal of eliminating wage disparity based on gender. At that time, pay discrimination was harder to establish as men and women often held jobs that were dissimilar. The focus of the EPA is narrow and bans different levels of pay for men and women doing essentially the same work at the same facility.

The official phrasing used by the Equal Employment Opportunity Commission, which administers the EPA, is: “Employers may not pay unequal wages to men and women who perform jobs that require substantially equal skill, effort, and responsibility, and that are performed under similar working conditions.”

A petitioner citing the EPA does not have to prove discrimination was intended, just that it existed. The law places the weight on the employer to demonstrate that any pay disparity is based on specific legitimate criteria: seniority, merit, quality, and quantity of work output, or any factor other than gender.

The year after the EPA was enacted, the situation became trickier with the passage of the Civil Rights Act of 1964. Title VII of that law addresses all types of discrimination, not just pay, and the scope reaches beyond gender to include “protected classes,” such as race, religion, age, or national origin. The law has two key differences from the EPA:

1) Instead of “substantially equal,” comparable jobs for pay discrimination purpose need only be “similarly situated,” and

2) The jobs don’t have to be at the same facility.

Title VII would also cover situations in which women, or other protected class members, are shifted into positions that pay less than those available to men.

In 2009, decades later, Congress passed the Lilly Ledbetter Fair Pay Act. Essentially, this eliminated the statute of limitation on pay discrimination claims. A woman who was hired years earlier at a discriminatory pay rate, whose wages never caught up with those of male coworkers hired during the same period, could be eligible to receive back pay for the cumulative difference. In theory, this could be a substantial amount.

Of course, some states and localities, including Maine, have pay discrimination laws and regulations as well. You will want to make sure you are aware of them as well.

Making the Need for a Cure Less Likely

No company can assume it is immune from charges of pay inequality until a closer look, or self-audit has been done. The basic elements are:

You do need to be careful when doing a self-audit. If it is not set up properly and there are potentially problematic findings, you could be handing the plaintiff’s attorney everything they need to prove their case.

To ensure the self-audit is confidential and not “discoverable” in litigation, pull it under attorney-client privilege. According to the Society for Human Resource Management, your company CEO should send a letter to your attorney stating that you are seeking legal advice on whether you might be at risk for pay discrimination claims. Ask the attorney to request that the appropriate people within your company conduct a self-audit, and request that the attorney direct all the parties involved to maintain strict confidentiality in carrying out this review.

When examining your policies and practices, weight them for clarity, level of detail and whether systems are in place to check compliance. For example, are managers obliged to explain in writing the reasoning behind their pay decisions and are those explanations reviewed in outlier cases?

The self-audit requires a careful review of all the numbers, including starting pay, merit pay increases, and pay raises stemming from promotions. Do they seem to have been based on objective criteria and carried out consistently with regard to men and women?

Review the same data in light of other “protected status” employee categories while you’re at it if you have concerns about potential issues there as well.

It’s easy to go overboard — or “underboard”— when collecting data. You need to review numbers going back far enough to get a reliable analysis. Consult an expert to identify how far back you need to go before you reach the point of diminishing returns. If you do have a robust data set, having an analyst perform regression analysis may make sense.

If your self-audit produces a clean bill of health, well done and keep up the good work. If not, take appropriate actions. Given the sensitivity of the matter, consult with a labor attorney for help in conducting your review and in determining next steps following the review.