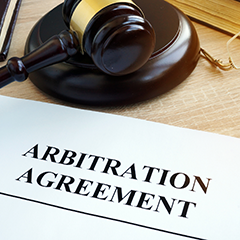 The Supreme Court often agrees to rule on issues where individual appeals courts have come to different conclusions, in order to create a uniform national legal standard.

This was the situation when the court passed down a 5-4 decision for Epic Systems Corp. v. Lewis. The question being decided was whether the Federal Arbitration Act has more authority over arbitration agreements between employers and employees than the National Labor Relations Act (NLRA).

Three similar cases were consolidated by the court by this ruling. In each of the three cases, the employees had entered into agreements with their employers to resolve any labor disputes that might come up with arbitration, instead of taking the employers to court.

Even though they had signed the agreements, once disputes arose affecting the individuals and their coworkers though, the employees argued that the agreements were not valid.

The employees alleged the agreement to use arbitration prevented them from participating in a class action lawsuit, which, in their argument, is a “protected activity” safeguarded by the NLRA. For the last six years, the National Labor Relations Board (which is instrumental in enforcing the NLRA) has taken this position and supersedes the Federal Arbitration Act.

The majority Supreme Court opinion, written by Justice Neil Gorsuch, came to the conclusion that Congress had intended to enable employees to form labor unions when it adopted the NLRA. Given that assumption, arbitration agreements are unrelated to the protected activity that is sheltered by the NLRA—union building.

Employers are not given a blank check by this ruling, though, in regards to how they introduce arbitration into their employer-employee dispute resolution programs. Instead, it says that arbitration agreements that preempt class action litigation aren’t fundamentally illegal. If challenged in court, how you put them in place will matter a great deal if they are to hold up.

Why might you want to have your employees accept mandatory arbitration to start with? Arbitration allows a dispute to be resolved quicker and less expensively that it likely would if it went into the court system. When an employer is sued and taken to court by a disgruntled employee, even if it’s a dubious claim, many employers will choose to settle the case just to make it go away and reduce the overall expense. With arbitration, that isn’t necessary. Because the arbitration process is relatively inexpensive, it’s more appealing to stand your ground and defeat claims that are found to be bogus.

Attorneys recommend that you take several precautions in order to ensure arbitration agreements hold up to potential legal challenges. One is to keep it outside of a longer employment agreement, making it a stand alone-agreement for the employee to sign. By doing this, an employee would have a hard time claiming they weren’t aware that they had agreed to arbitration.

Agreements must clearly state that the agreement is mutual, applying equally to both the employer and the employee. The agreement should also provide general guidance on the categories of disputes it covers. For instance, arbitration may not be the best way to handle a dispute involving theft of company property.

When you start working with an attorney to draft an arbitration agreement, here are a few additional things to consider:

No matter what provisions you include in an arbitration agreement, the goal is to avoid issues if an employee challenges its validity in court. Standards will vary by jurisdiction and based on the level of risk you’re willing to assume. A qualified labor attorney can walk you through the entire process, from deciding whether an arbitration agreement makes sense to drafting the agreement itself if it does.

« Does Your Business Need a Temporary CFO?
What’s the Status of Gender-Based Pay Discrimination? »