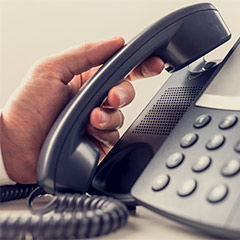 Would you leave the front door of your house unlocked? Probably not. What about your business or not-for-profit organization? Even more unlikely.

While we like to think the best of our fellow Mainers, leaving the front door unlocked would welcome in the thieves. Not having strong anti-fraud controls in place at your business to protect against dishonest people inside the organization is the same thing. Theft from insiders — also known as “occupational fraud”— can be expensive.

Losses due to fraud vary a lot, based on the nature of the scam and how early it’s detected. Globally, the median loss is $130,000, as per the findings from the 2018 Report to the Nations on Occupational Fraud and Abuse by the Association of Certified Fraud Examiners (ACFE). Here’s a closer look at who was affected and how much they lose, as shared in the most recent version of this biennial report.

Fraud can affect any organization no matter the nature of its operation or its size. The 2018 ACFE study included 2,690 fraud cases that occurred between January 2016 and July 2017.

High profile fraud incidents involving public companies receive the most focus in the news, the median loss for those companies was just $117,000. Much greater losses were incurred by private companies with a median loss of $164,000. And to fill out the ledger, the median losses for government and not-for-profit organizations were approximately $118,000 and $75,000, respectively.

There are also subtle distinctions between the types of fraud schemes that affect small and large organizations.

To Catch a Thief

For both small and large organizations, tips are the most common way fraud is initially detected. However, tips were the detection method in only 29% of the cases at smaller organizations, compared to 44% of the cases involving larger ones. This may be a function of reporting hotlines, which are more common to larger organizations than those with fewer resources.

Remember that tips can come from the outside as well. Outside stakeholders, such as customers, vendors, and other partners can also provide tips regarding unethical behavior. The 2018 study identified 21% of tips coming from customers and 9% from vendors. So educate all of your supply chain partners about any reporting mechanisms you employ.

In addition to tips, using a strong system of internal controls can help detect and prevent fraud. The 2018 study found that internal audit procedures detected 15% of frauds and management review 13%.

The most critical elements of such internal systems? The most effective internal controls to lower fraud loses in the 2018 study were:

A lack of strong internal controls can provide dishonest people with the openings they need to steal assets or “cook the books.” According to the ACFE study, two of the leading factors that contributed to fraud were a lack of internal controls and the ability to override internal controls. These two factors were present in almost half of the fraud cases they studied.

The first line of defense for any organization fighting white-collar crime is honest employees. Encourage employees to join in the fight:

Invest in training. Educate staff on the indicators associated with fraud within and outside organizations. This helps detect and prevent fraud, while also sending a message about your intention to fight fraud no matter where it originates. The sense that fraud is a high-risk activity is often sufficient to dissuade those who might otherwise consider it.

Keep management involved. Your organization’s managers must be visible and actively maintaining the controls. If subordinates see them as unwilling or unable to check the controls, they may take that as an indication it’s ok to commit fraud.

Set up a hotline. The most effective method of obtaining tips about unethical behavior is to set up an anonymous fraud reporting hotline. Many small organizations see this as too expensive or hard to administer, which is unfortunate. There are a number of providers who have hotlines designed for smaller organizations. The cost per employee is very low in relation to the potential amount saved by uncovering fraud and avoiding losses.

Related, consider adding non-telephone methods of reporting fraud. More than half of complaints studied were submitted via email or online form.

The ACFE’s fraud report has taught important lessons over the last two decades including that no organization is immune to white-collar crime. As a result of this report, and recent high-profile public fraud cases, many companies have implemented antifraud controls in recent years.