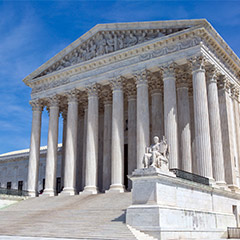 Fewer than 100 of the thousands of cases appealed to the U.S. Supreme Court each year get a full-blown hearing and ruling. Encino Motorcars v. Navarro is one case that did make it through in the current court term. We wrote about this previously in relation to the question of whether car dealer service advisors are exempt or nonexempt. The larger issue that affects all sorts of jobs is how narrowly the relevant law — the Fair Labor Standards Act (FLSA) — can be read deciding between exempt status and nonexempt.

To recap, Encino Motorcars v. Navarro was brought by service advisors at a Los Angeles Mercedes-Benz dealership. The service advisors worked from 7 a.m. to 6 p.m. five days a week, well over 40 hours, and were seeking overtime pay for the difference.

Reading the FLSA carefully shows an exemption for “any salesman, ‘partsman’ or mechanic primarily engaged in selling or servicing automobiles” at a dealership. Encino Motorcars argued that the service advisors fell under that exemption in this case. The service advisors disputed this, claiming that they were just a “communications channel,” not proper salesmen, and thus, not covered by the exemption.

When the appeals court originally took on the case, the U.S. Department of Labor (DOL) was subject to Obama-era regulations that appeared to suggest that, in many situations, workers claiming to be nonexempt should be given the benefit of the doubt. The appeals court upheld the service advisors’ claims on that basis. But in 2016, the Supreme Court shot down those regulations.

Another round later, the Supreme Court ruled for the dealership’s side. The court said that the language of FLSA made it clear enough even though it did not specifically state that service advisors are exempt. The opinion states, “A service advisor is obviously a salesman,” and therefore exempt. Justice Thomas wrote for the majority that there is nothing in the FLSA that states, “its exemptions should be construed narrowly,” therefore “there is no reason to give them anything other than a fair, rather than a ‘narrow’ interpretation.”

Thumb on the Scale

However, the ruling was close — 5 to 4. According to one labor law expert, “By removing a heavy judicial thumb from the workers’ side of the scales in FLSA exemption litigation, [Encino Motorcars v. Navarro] is likely to figure prominently in many pending and future exemption cases.”

That said, you would probably like to avoid being the next Supreme Court test case. Even if you are ultimately vindicated, the legal bills alone are discouraging. But since the Supreme Court is saying that the law does not precisely spell out an employee’s classification status in all instances, your careful judgment will be required.

The basic categories of employees the FLSA deems exempt from overtime requirements fall under the executive, administrative, professional, computer, “outside sales,” and highly compensated categories. Courtesy of the DOL, here is a streamlined set of standards for those categories:

You can find more detailed standards for each category at www.dol.gov. And stay tuned for possible changes in that $455 weekly salary threshold standard as it is under review. Finally, when in doubt, check with a labor law expert.