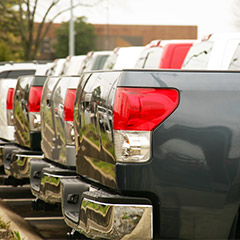 Tucker Cianchette won a nearly $6 million dollar settlement in a lawsuit first filed in June 2016 against his father, Eric Cianchette, a prominent businessman. A jury in Portland has awarded the money in contract, fraud and punitive damages to Tucker Cianchette. The verdict was unanimous, while only six votes were needed by the nine-member jury. Mark Filler, CPA, of Filler & Associates was the plaintiff’s damages expert.

Tucker Cianchette owns one-third of Casco Bay Ford in Yarmouth. His father Eric and his wife Peggy own the other two-thirds of the business. A deal was apparently in place in November 2015 to sell the entire business to Tucker, but the deal fell through.

After the deal went sour, Cianchette sued his father and stepmother, on a range of charges. On March 1, a Cumberland County Superior Court jury ruled unanimously that Eric and Peggy Cianchette breached the contract and committed fraud in proposing to sell Casco Bay Ford to Tucker Cianchette.

The jury’s award of damages included $3.1 million for fraud and breach of a business contract and $750,000 for breach of a contract to sell real estate. Also, Eric Cianchette was ordered to pay $1.5 million in punitive damages.

Since 2013, Eric, Peggy and Tucker Cianchette have jointly owned Casco Bay Ford, and Tucker Cianchette, who held a 33 percent stake, was the general manager. He maintained that a deal, struck in late 2015, to allow him to buy the dealership outright was actually a ruse and part of an effort to force him out, said Tim Norton, an attorney who partnered with Jennifer Archer to represent Tucker Cianchette.

Tucker Cianchette still has his stake in the business, but he left the dealership early in 2016. He has since bought a Chevrolet dealership in Waldoboro and is general manager of a Ford dealership in Brunswick.

Eric Cianchette’s lawyers said in a statement: “The Cianchette family respects the process but strongly disagrees with the jury’s verdict and believes that will need to be corrected by the state’s highest court. We are a long way from the finish line on this matter and the Cianchettes are confident that their rights will ultimately be vindicated.”

See the full story from the Portland Press Herald here.