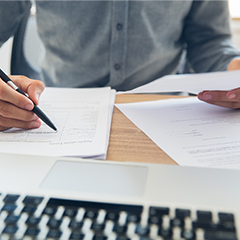 In February, many employees began to see increases in their paychecks to reflect the new law. According to the IRS, “the time it will take for employees to see the changes in their paychecks will vary depending on how quickly the new tables are implemented by their employers and how often they are paid — generally weekly, biweekly or monthly.”

The new withholding tables are designed to work with the W-4 forms that workers have already filed with their employers to claim withholding allowances. The IRS stated that this minimizes the burden on taxpayers and employers, and at this time, employees don’t have to do anything.

Why the Changes Are Needed

The new law makes a number of changes for 2018 that affect individual taxpayers. The new tables reflect:

The new tables are designed to produce the correct amount of tax withholding for people with simpler tax situations. The revisions are also aimed at avoiding over- and under-withholding of tax as much as possible.

The IRS is also working on revising Form W-4. The revised Form W-4 and the revised calculator will reflect additional changes in the new law, such as:

Maine employees can use the calculator and new Form W-4 if they wish to update their withholding in response to the new law or changes in their personal circumstances in 2018, and by workers starting a new job. Until a new Form W-4 is issued, employees and employers should continue to use the 2017 Form W-4.

In addition, the IRS announced it will help educate taxpayers about the new withholding guidelines and the calculator. The effort will be designed to help workers ensure that they aren’t having too much or too little withholding taken out of their pay so that when they file their tax returns they don’t get a surprise.

Two Democratic congressmen are questioning whether enough taxes will be taken out of the checks of employees under the IRS’s 2018 withholding tables. In letters sent to federal tax officials, Senator Ron Wyden (OR) and Representative Richard Neal (MA) expressed concern that the new withholding tables would “result in millions of taxpayers receiving larger after-tax paychecks this election year but ultimately owing federal income tax when they file in 2019.”

The IRS anticipates making further changes involving withholding for 2019, and will work with the business and payroll community to encourage workers to file new Forms W-4 next year and share information on changes in the new tax law that impact withholding.

Acting IRS Commissioner David Kautter noted: “Payroll withholding can be complicated, and the needs of taxpayers vary based on their personal financial situation. In the weeks ahead, the IRS will be providing more information to help people understand and review these changes.”

Consult with your tax advisor if you have questions about whether you will have enough taxes taken out of your paycheck for 2018.